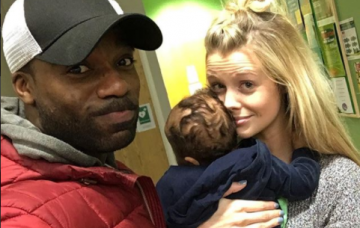 Ore Oduba has fans thinking second baby is on the way!

He welcomed son Roman in January.

He only welcomed his son Roman with wife, Portia, in January.

So Ore Oduba’s fans were a bit surprised when they saw his latest Instagram pic and initially thought another baby was on the way!

The Strictly champ shared a Polaroid picture of him and Portia posing with a positive pregnancy test and delighted faces.

But the caption revealed this was not a new announcement – but, in fact, the moment they discovered Portia was pregnant a year ago.

He shared the throwback snap to mark the milestone as they’re now proud parents to their four-month-old.

He added: “You can pray for it, dream about it, plan for it… But nothing can prepare you for it. Best. News. Ever.”

His followers said they were almost fooled into thinking a second baby was already on the way.

“For a split second was about to write congratulations on number two…” one wrote.

“I thought you were announcing baby number no 2!! And thinking man you guys are fast!” said another.

A third agreed, exclaiming with laughing emojis: “I thought it was baby number 2!!”

Portia got a similar reaction when she shared the same snaps on her account.

“Portia!!!! This tricked me thinking this was an announcement I didn’t know about!” one of her followers told her.

“I thought you are pregnant again and felt hot flush down my body haha,” said another.

Portia clarified in her caption that it was a throwback snap and her “body wouldn’t cope” with being pregnant again so soon after giving birth.

She wrote: “EXACTLY A YEAR AGO TODAY I ran at Ore waving a stick around hysterically.”

Her hashtags included “a year ago”, “not baby number two”, “my body wouldn’t cope” and “so thankful”.

Ore and Portia have regularly shared honest updates on life with a newborn since Roman was born – although they avoid posting pictures which show his face.

Portia has admitted she’s found the sleepless nights difficult and recently revealed it took her a while to pluck up the courage to go out with her baby solo.

In a lengthy post written beside a picture of her and Roman on the Tube, she said: “For a good few months I was really nervous about going solo. Using a pram on the London Underground isn’t really an option for me when I am on my own (I find it too stressful, did it once, never again) so slinging for me is the way to go.

“But even this, when on your own is daunting, what if he cries, is the sling too tight, is he getting hot, will I be able to get a seat, many questions I ask myself?! All these things are manageable but at the beginning seem really overwhelming.”

She added: “I soon realised that the more I pluck up the courage the more confident I will get, otherwise what do I do, sit indoors at home everyday? (that isn’t good for me or Roman) so getting confident and flying solo it was…

“Now, I don’t think twice about getting about in a big city… to any mums out there looking at mums on Instagram or friends and worrying/getting nervous about taking your little ones out solo, don’t!!! It does take some organising, and baby steps are everything, even if your outing is to your local shop and back you have got out the house and done it! And trust me, once you do, you will feel amazing.”

Meanwhile, Ore took on co-hosting duties on Monday’s This Morning. He stood in for Holly Willoughby and Phillip Schofield with Lisa Snowdon as the usual presenters took the Bank Holiday off.

Did you have a second baby soon after your first? Leave us a comment on our Facebook page @EntertainmentDailyFix and let us know what you think!