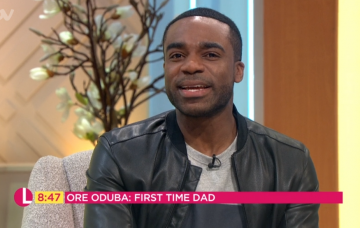 He became a dad in January

Strictly Come Dancing star Ore Oduba appeared on Thursday’s Lorraine to open up about becoming a dad for the first time.

Ore, 32, and his wife Portia welcomed their son Roman back in January, but Ore admitted he initially struggled to bond with his baby boy.

Speaking to Lorraine Kelly, Ore opened up about a bonding moment he shared with his son that “tore him in two.”

Read more: Ore Oduba has fans thinking second baby is on the way!

The dancer became teary-eyed as a clip from his Instagram account played that showed him sharing his feelings after feeding his son for the first time.

In the emotional video, Ore held up a baby bottle as he said: “That is an empty baby bottle.

“I hadn’t been able to do that until this weekend. Just now I had a really lovely bath with [Roman] and for the first time he looked at me like he trusted me.

“That was the first time he actually looked at me like his dad.”

As the camera returned to the studio, Ore was overcome with emotion.

“I didn’t know you were going to show me that,” he said. “[Portia and I] are so lucky. I’m so lucky to have Portia because she is the most incredible mother.

“Immediately, that [maternal] instinct just kicked in and it was like she was born to have him in her arms.”

“But as the dad, you’re there for support,” Ore continued. “I was told so many times by friends, ‘you’re not going to get anything back mate for about six weeks, just be there and you’ll have a role eventually’.

“But obviously you want to be able to support and I will just do everything I can for them, but there’s a difficulty when it’s not coming back.”

“You’re just there like, ‘I’m here too,'” Ore quipped. “We tried for weeks to get him take the bottle [after breastfeeding].

Ore revealed Roman rolled over for the first time recently and he was “weeping” over the milestone.

Ore and Portia became parents for the first time in January.

“Been a pretty life-changing last 12 months, now [Portia] and I are preparing for our biggest adventure yet! Can’t hide our excitement anymore.

“Starting a family has always been our dream. And no prizes for guessing.. THERE. WILL. BE. TEARS!!!!”

What did you think about Ore’s admission? Leave us a comment on our Facebook page @EntertainmentDailyFix and let us know what you think!