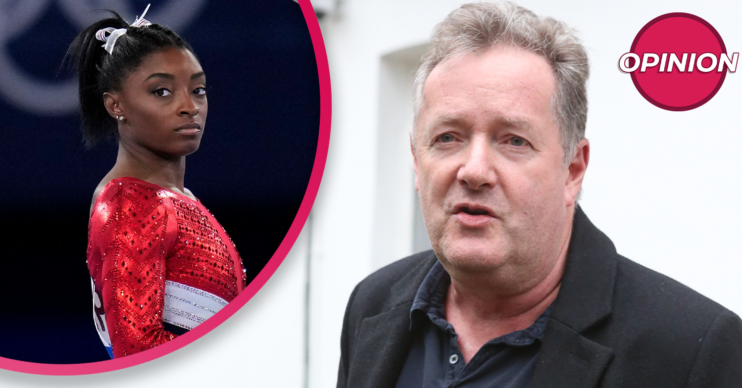 OPINION: Why we should be glad Piers Morgan isn’t on GMB after his comments about ‘selfish’ Simone Biles

He's called her a quitter and it's just downright dangerous

Piers Morgan is back on his soap box after American gymnast Simone Biles decided to pull out of the Tokyo Olympics citing mental health reasons.

“Just a lot of different variables and I think we’re just a little bit too stressed out. But we should be out here having fun and sometimes that’s not the case.”

Biles also admitted that she had to do “what’s right for me”. She added she wanted to “focus on my mental health and not jeopardise my health and my well-being.

“So that’s why I decided to kind of take a step back.

“At the end of the day, we’re human, too. We have to protect our mind and our body rather than just go out there and do what the world wants us to do.”

Read more: Piers Morgan rips into Twitter troll with his best comeback ever

However, as someone who’s been labelled a quitter himself, Piers was surprisingly irate at Simone’s exit – and the “snowflakes” who’ve backed her on Twitter.

Writing in his Daily Mail column, he said: “I don’t think it’s remotely courageous, heroic or inspiring to quit.

“And yes, I say that as someone who walked off the set of Good Morning Britain earlier this year during an argument with a co-worker about Meghan Markle, the person who more than any other has fuelled this cynical new phenomenon of shutting down legitimate criticism by disingenuously playing the mental health and race cards.”

All routes lead back to Meghan it seems for the ex-GMB anchor.

So is he right or wrong to call Simone’s mental health into question, just as he did with the Duchess of Sussex?

Call me a snowflake if you like Piers, but I’m glad you’re not on GMB any more.

Take to Twitter all you like, but without Good Morning Britain to air his views, they aren’t getting even half as much oxygen as they could…

Which is a good thing.

Read more: Piers Morgan reignites feud with Dan Walker as he brands him a ‘liar’

If you’ve ever struggled with mental health, admitting you’re struggling is a mammoth step.

So to admit it on such a public stage IS brave Piers. It IS courageous. And it SHOULD be celebrated, not belittled.

How many other athletes will be feeling exactly like Simone? Sat there fearing for their mental well-being, only to see a series of tweets insinuating they’re weak and selfish for putting themselves first?

So what is Piers Morgan’s stance on mental health?

Piers himself admits he takes “mental illness seriously”. Yet he calls into question the validity of Simone’s claims – just like he did with Meghan’s.

He added: “What I don’t like is people cynically using ‘mental health’ as a protective shield against any poor performance or justified criticism.”

Who are we to say what’s going on in her mind and why she made the decisions she did?

It’s fair to say Simone didn’t have the best result before she decided to step back. However, who are we to say what’s going on in her mind and why she made the decisions she did?

It’s dangerous to spout these views and could be extremely harmful to others who aren’t as brave as Simone and feel they have no option – after reading negative comments like these – but to put on a brave face and carry on.

Not everyone is capable of doing that – and neither should they.

So, to sum up today’s big Simone Biles debate, snowflake Twitter is 100% adamant that walking out on teammates at work is brave, strong, inspiring and iconic – and anyone who does it should be celebrated as one of the world’s great heroes….
Good to know. 👇 pic.twitter.com/HclTrBbfY3

We spoke to the head of physical activity for mental health charity Mind and they said “unimaginable” levels of “pressure, strutting and comparison” blight those in sport.

They added: “Simone Biles is incredibly brave for speaking out about her mental health and making the decision to prioritise her own wellbeing.

“Our research at Mind has shown that when people in the public eye speak about their mental health, it encourages others to do the same. As many as one in five people have spoken to a loved one as a direct result of seeing a celebrity speak out.

“This demonstrates how vital it is that people in the public eye continue to speak honestly about their mental health experiences.

“We hope Simone’s decision encourages anyone struggling with their mental health to get the help and support they need. We applaud and respect Simone and hope that she is given the space and time she needs to look after her mental health.”

And yes Piers, I’m talking to you!

For more information on Mind’s work in sports visit the website here.