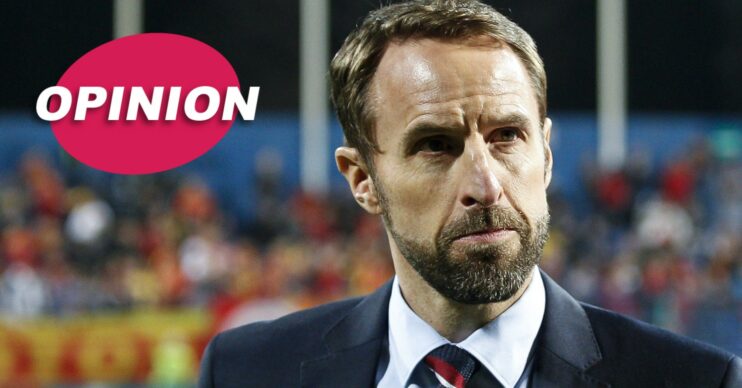 OPINION: Why Gareth Southgate needs to be knighted after Euro 2020

Gareth Southgate needs to be knighted after Euro 2020.

There, I said it.

The England manager – and former player – has been a huge success since he took the reins in 2016, moulding England from nearly-men to a force in world football.

Why Gareth Southgate needs to be knighted after Euro 2020

Gareth Southgate is not a nurse or a doctor, nor a pioneering scientist or a tireless charity volunteer.

No one is saying that.

But the fact is that sport – and in this case football, our national game – really does bring a nation together like no other.

Read more: How Gareth Southgate nightmare penalty miss in 1996 has driven him to thrive as England manager

People from all walks of life and of different political and cultural persuasions get the flags out, sing songs and talk about the games in pubs and over garden fences.

We saw it in 1996, and we’ve seen it under Gareth’s stewardship. The flags and the feel-good factor is back.

In the five years since he became manager, England have reached three semi-finals – the World Cup in 2018, the UEFA Nations League in 2019 and now Euro 2020.

No other England manager has done this.

Yes, England have reached quarter-finals of World Cups before, but not since 1966 (yes, I mentioned that as well) has an England team enjoyed such sustained success.

The redemption of Gareth Southgate

It all could have been so different for Gareth Southgate.

The 50-year-old was born in Watford, and burst onto the scene as an intelligent and cultured centre back for Crystal Palace in the late 1980s.

He then went on to play for Aston Villa and Middlesborough, but it was his time with England in the 1990s that shaped him.

And it was during 1996 where he made headlines.

In the penalty shoot-out, he missed the deciding kick in the semi-final against bitter rivals Germany. Euro 96 was a tournament that England really should’ve won, but Gareth’s penalty miss has stayed with him ever since.

And this is why, off the pitch, it’s been such a delight to see him do so well. He’s shown strength of character and mental toughness aplenty, alongside bucket-loads of humility.

Mr Nice Guy off the field

His Mr Nice Guy approach off the field has endeared him to fans up and down the country.

The first thing he did in post-match interviews after the victory against Ukraine at the weekend was to praise the players who did not make the team.

And, prior to the tournament, Gareth released a statement that made your chest swell with pride.

In a stirring piece written for The Players’ Tribune, he said: “Our players are role models.

“And, beyond the confines of the pitch, we must recognise the impact they can have on society. We must give them the confidence to stand up for their teammates and the things that matter to them as people.

“I have never believed that we should just stick to football.”

Gareth is fully aware of the importance of being England manager and what it means – football is more than a game, and he represents every one of us.

What are you waiting for Your Majesty?

It’s not just me who thinks Gareth should receive a knighthood.

According to The Sun, Gareth is 2/1 with bookies to be knighted, while over on This Morning, Holly Willoughby and Phillip Schofield launched a campaign for him to receive the honour in 2018.

After the semi-final defeat to Croatia in the World Cup, the pair wrote a letter to the powers that be asking for the knighthood.

Read more: This Morning launches campaign to get Gareth Southgate a knighthood

And no, he hasn’t won a tournament or been a key worker. But what Gareth Southgate has done is something historic on the field, and brought us together as a nation when we needed it most.

He’s a fine football manager and a natural-born leader, but an even better man.

So what are you waiting for Your Maj?