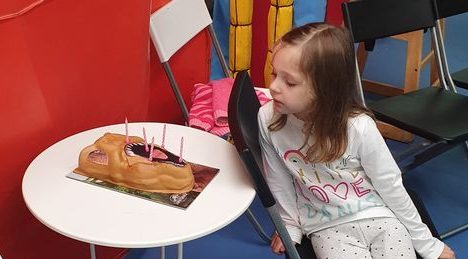 It ended up being a very happy birthday for Remi

The father of a five-year-old autistic girl has revealed that he received an “overwhelming” response to a plea he posted on Facebook.

PJ Robins took to social media when just two friends turned up to celebrate his daughter Remi’s birthday at a play centre in Abertillery, Wales.

He said: “This is an appeal to anyone who may have time free between now and 2.30pm. My daughter is having her 5th birthday party today but only one of her little friends has turned up.”

He added: “My daughter is autistic but she is a lovely little girl and this is going to literally devastate her if nobody shows up.”

Read more: This Morning guest reveals his six-year-old adoptive daughter was actually 22 and wanted to kill him

Adding that they had “7 spots open”, PJ pleaded: “Please help us.”

Speaking to Wales Online, PJ revealed that just two friends turned up to celebrate with Remi.

He added that two other guests had got in touch on the day to say they couldn’t make it due to illness, but others hadn’t RSVP’d at all.

“It was really very sad that none of them had bothered to respond really. One of the things with the autistic spectrum is that last-minute changes are terribly distressing, especially to Remi,” PJ said.

Read more: NHS at crisis point as millions of Brits have to wait a month to see their GP

“We’d already told her about the party and that we’d invited her friends so she was expecting her friends to be there. At one point she turned around and said: ‘Mummy, where are all of my friends?’ and that was like a knife in the heart.”

The response was truly overwhelming. We’re still receiving messages from people asking for our address so they can send cards, or drop in and meet Remi.

However, thanks to the power of social media, the post was shared more than 1,000 times and PJ received 60 messages from people who’d seen the appeal.

And, in the best news of all, around 14 children and their parents turned up to celebrate with Remi at her party.

PJ said Remi was a “little bit bewildered” as she went from having two friends celebrating with her to dozens.

He added: “The response was truly overwhelming. We’re still receiving messages from people asking for our address so they can send cards or drop in and meet Remi.”

What do you think of our story and the kindness of strangers? Head to our Facebook page @EntertainmentDailyFix and let us know!