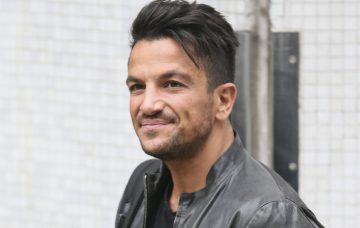 Growing up so fast!

Peter Andre has joked he’s “scared” about son Junior’s knowledge of the birds and the bees!

Peter, 45, explained how he’d been chatting to Junior about becoming a teenager, which led to that often awkward topic coming up…

He wrote: “I went to have ‘the’ conversation with him the other day and he was like, ‘Hang on, Dad. Let me tell you about the birds and the bees.’

Peter added that he has given Junior one valuable piece of advice, however: to always be “respectful”.

The former couple also have daughter Princess, ten, while Peter shares daughter Amelia, four, and son Theo, one, with his second wife Emily.

While it’s obviously a huge thing for Pete and Katie to see their son become a teenager, it’s also sure to strike a chord with their fans, who watched Junior grow up on TV.

The little boy has featured in his parents’ reality shows since birth, as well as appearing in photoshoots with them, and in their autobiographies.

Peter, meanwhile, previously joked he wasn’t ready for either Junior or Princess to become teenagers!

And in a separate interview with OK! magazine, the former I’m A Celeb contestant said he wasn’t ready to deal with Junior or Princess dating as teens!

“What freaks me out is that in five years Junior will be 17 and meeting girls,” he said.

How did you feel about your children becoming teenagers? Are your kids nearly at that milestone? Leave us a comment on our Facebook page @EntertainmentDailyFix and let us know what you think!