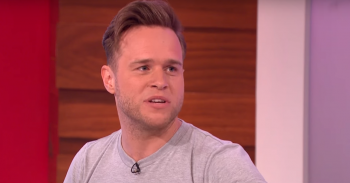 The Voice coach Olly Murs admitted he was “mental” to take on the freezing shower challenge as he appeared on Chris Evans’ breakfast radio show this morning.

But the cheeky chappy might need to take another cold one after an author offered to slip into the shower with him if she attempts to beat his record feat of endurance.

Elizabeth Day joked she would be keen to try and better Olly’s accomplishment herself – as long as the former X Factor is on hand.

Olly, 34, let out a few shrieks after stripping off and stepping into the icy cold spray but still managed to break the previous winning time for the challenge… by just one second.

And while he prove game for the chilly test, Olly admitted beforehand he had hoped DJ Chris would have forgotten about him agreeing to getting his kit off for it during his last appearance on the show.

However, credit where it is due – he did not try and back out of the deal he struck.

“There’s not many people who would come on your show and agree to do a cold shower,” he added.

As host Chris guffawed while Olly yelped, the Troublemaker star made sure to get his plug in for this weekend’s final of The Voice.

But he did not hang around when he toppled the previous best time for tolerating the perishingly-cold blast of water.

Olly scarpered out as he claimed victory by one whole second.

“I could have gone longer, but after I saw I beat [the show’s executive producer] and went over 43 seconds, I didn’t want to go further,” he later told Chris in the studio.

Elizabeth added: “I love a cold shower so I’ll do it if I can shower with Olly.”

Just got interviewed by #ChrisEvans, the broadcasting genius I grew up listening to & watching. What an unforgettable morning. Thank you @VirginRadioUK for having me and for seating me next to @ollyofficial who says he’ll come on my podcast so there’s no backing out now. pic.twitter.com/GuglroKfAz