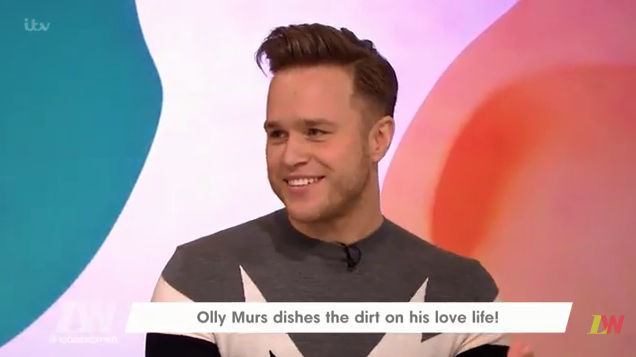 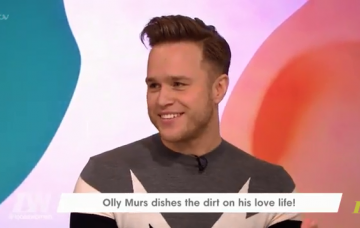 Olly Murs should have known what he was signing up for when he agreed to take part on the Loose Women panel this afternoon.

If there’s one thing they’ll guarantee, it’s to ask awkward questions that may need a delicate answer!

As you’ll remember, at the end of last year it was reported that Olly had secretly been in a relationship with Melanie Sykes for a whole YEAR.

So of course, when Olly appeared on the show this lunchtime, it wasn’t long before he was asked the killer question.

Kelly Brook asked him outright if he was single, to which Olly replied: “I am single, yeah. I heard you guys talking about the rumours earlier!

“Every time I pick up a paper I see ‘Olly spoke to this girl, he must be dating her!’ but no I’m single, last time I checked.

However the Loose Women wouldn’t let it lie, continuing to grill the singer.

Kelly said: “Melanie Sykes! Did you date Melanie Sykes? Mel is so beautiful and funny and nice.”

A clearly sheepish Olly replied: “Mel’s amazing, we’re great friends, the rumours we were dating for a year is just not true.”

Under a barrage of further questions from the panel about whether they’d actually had even a date at all, Olly admitted: “There might have been something, but listen… I’m not gonna talk about it… moving on!” before dissolving into laughter.

Olly had only been on to talk about his new role as a judge on The Voice, bless him, and did his best to get the conversation back on track.

Olly played along, saying: “I would snog will. Why not? That would be fun. I think I would avoid Sir Tom just because he would be too much to handle! He’s such a legend – I can’t compete with him in that category!”

“And I’d definitely marry Jen because she’s amazing. It’s great when you meet the people you admire from afar, the people whose albums you have bought, and they’re so lovely. All of them.”

Meanwhile, Mel addressed the Olly romance rumours herself back in November, posting a spectacular denial in a sassy Instagram post.

Along a pap picture of her looking incredible, she wrote: “To all Those writing [bleep] about me & my life. This is what a single, happy, healthy, 47yrs old independent mother of two teenage sons looks like. DEAL WITH IT! (sic).”