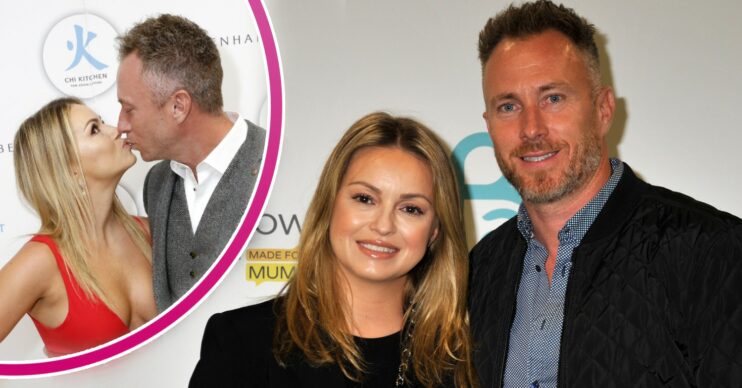 The pair are determined to get active

Strictly stars Ola and James Jordan opened up about their weight gain and how it has affected their sex life.

After Ola, 39, shared a picture of the pair in their swimwear at their home in Kent last month (July 20), she admitted yesterday (August 4) that their “bellies get in the way” of their sex life.

Ola had wrote on Instagram: “Hi guys. I wasn’t going to post this picture but I’ve decided to because I’m horrified and so disappointed with myself, and by posting it, I’m hoping it will help motivate me to do something about it.

“Our friend took this snap of us yesterday trying to stay cool by the pool, but OMG… it was a total shock, to say the least.”

She added: “When did we get ‘mum and dad bods’?

“We know we’re not in our best Strictly shape, but hey, that’s what happens when you stop dancing for hours every day and have a baby.

“(I just want to know James’ excuse). Stay cool, everyone. I think I need to avoid the ice cream for a while!

She finished the caption with: “Couples that eat together stay together.”

Now, speaking to The Sun, James, 44, stated that his love of junk food had “led them both astray”, and the weight gain had deflated their sex drive.

Ola expressed: “The sex life is definitely different, if not worse, because we are so fat and don’t want to move after a bag of crisps and a Chinese.”

However, the pair may be too hard on themselves as they have experienced a lot in the last few years.

James admitted: “It’s bad lifestyle choices we’ve made because of different reasons, like lockdown, we both grieved very heavily with my dad’s death, and I stopped smoking”.

Ola and James welcomed a daughter named Ella in February 2020, which was bound to take up much of their time.

They were not competing in Strictly Come Dancing during this time either.

They admitted that the show required them to do 10-hour days of dancing, and they would sometime pop to the gym after.

So it’s completely understandable that they may not be as fit as they used to be.

But the ex-Strictly couple is said to be focused on getting healthy and active again.

Ola and James were flooded with support

Charlotte Crosby from Geordie Shore reassured her by saying, “You both still look bloody amazing! Hate to read you put yourself down! You are stunning, Ola! And both amazing people and parents”.

One fan disagreed with Ola’s language surrounding the weight gain, saying: “Omg, stop, don’t say horrified you guys are gorgeous!! And well done for sharing this beautiful photo of normal bodies, thank you.”