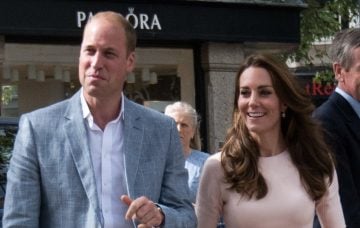 What a lovely image!

The Duke and Duchess of Cambridge have shared a shot of a grinning Prince George, captured by Matt Porteous, to mark his fifth birthday.

And we think everyone will agree he looks just adorable!

William and Kate’s eldest child beams for the camera as he stands against a brick wall.

Last year, they released a sweet studio shot of their little boy, which was taken by photographer Chris Jackson.

Matt Porteous also took a series of shots of the young Prince to celebrate him turning three in 2016, including this lovely image of him with the family dog, Lupo.

George was born on July 22, 2013, on the Lindo Wing of St Mary’s Hospital in Paddington, where sister Charlotte and brother Louis were also delivered.