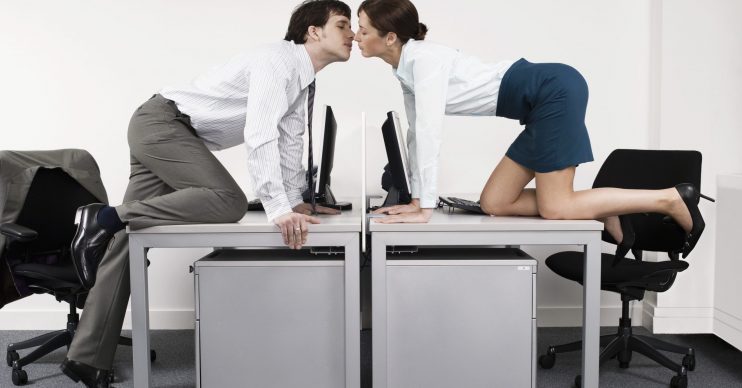 No more kissing in the stationery cupboard…

Although 16% of Brits meet their partners in the workplace, it’s been revealed that almost half of us want office romances “banned”.

A new survey revealed that most Brits think that the workplace is just for, ahem, work.

There goes our lunchtime smooch in the stationery cupboard!

Some 56% of those surveyed said they wanted a blanket ban on office romances, with three quarters of those between the ages of 18 and 22 (71%) revealing that they find workplace love affairs “inappropriate”.

The survey was carried out by online printing firm Instantprint and also revealed that men are backing away from finding love with colleagues because they’re worried about the #MeToo movement.

Some 60% of men said they were too scared to flirt with their female co-workers in case they were seen as predatory.

Others said they had their single colleagues’ best interests at heart, with 37 per cent of those surveyed revealing they didn’t want people in their office dating because they thought it would be “insensitive” to singletons.

They added that they didn’t think their colleagues should be made to feel “uncomfortable”.

However, for those in the minority who do want to find love at the office, the survey did reveal some top tips on how to meet the man or woman of your dreams at work.

The top way of initiating an office romance is asking a colleague to go out for a drink after work.

However, if you’re a bit nervous and want to be more subtle, timing lunch breaks so that you just happen to take them together was another top tip.

In the world of online dating, many people still meet their significant other at work.

While some even made extra cups of tea and coffee to bump into the object of their desire.

The office is the second most common place to find love, with 16% of people meeting their other halves at work.

Meeting someone in a bar remains the most popular way of finding a partner, while 14% of people now meet their boyfriend or girlfriend online.

Jon Constantine-Smith, head of Instantprint, said: “There has been a lot of conversation around workplace relationships of late and it’s interesting that in the world of online dating, many people still meet their significant other at work.”

He added: “It is interesting to hear these different attitudes across the workplace with some companies frowning upon office relationships. However, as long as it doesn’t interfere with work or impact the business, I see no harm.”

Did you meet your partner at work? Tell us on our Facebook page @EntertainmentDailyFix.