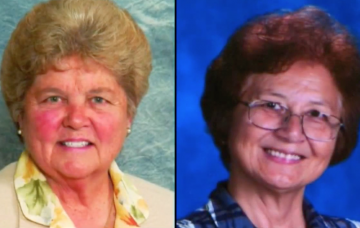 Two nuns have admitted embezzling about £400,000 in church school funds and blowing the cash on travel and gambling trips to Las Vegas, their order has confirmed.

Sisters Mary Margaret Kreuper and Lana Chang took the money from tuition fees and donations over many years and siphoned it into a secret bank account, it has been reported.

But school officials, who informed parents about the pair’s scam at a public meeting and in a letter, have decided they do not want them prosecuted.

The pair are believed to be best friends, and Ms Kreuper was principal at the school in Torrance, south of Los Angeles, for 29 years.

She retired earlier this year, as did Ms Chang who was a teacher there for two decades.

Read more: Paddy and Christine McGuinness ‘report theft of thousands of pounds worth of goods’ from home

The nuns’ order, the Sisters of St Joseph of Carondelet, said in a statement: “Our community is concerned and saddened by this situation and regret any injury to our long relationship with the families of the school.

“The Sisters of St Joseph both desire and intend to make complete restitution to St James School.”

A letter to parents from the school’s pastor, Monsignor Michael Meyers, said the pair had taken a “substantial” amount of school funds for their personal use.

The theft was only uncovered during a routine audit over a cheque after Ms Kreuper’s retirement.

Mr Meyers wrote: “Sister Mary Margaret and Sister Lana have expressed to me and asked that I convey to you, the deep remorse they each feel for their actions and ask for your forgiveness and prayers.

“They and their order pray that you have not lost trust or faith in the educators and administrators of the school.”

The pastor said the school did not wish to press charges and added that no other school staff had been implicated.

It is understood the nuns hid their tracks by depositing cheques made out to the school for tuition and other fees into a separate bank account.

Is the school right or wrong not to want the nuns charged? Leave us a comment on our Facebook page @EntertainmentDailyFix and let us know what you think!