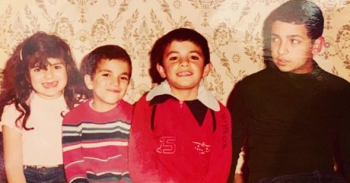 Fans got a glimpse of the star's past

Sentimental Peter Andre has dug out an old family snap and revealed how cute he was as a kid.

He thrilled fans with an adorable throwback picture, which showed him sitting in a line with his siblings.

A young Peter wore a stripy red jumper and posed with a cheeky grin in the snap, which appeared to be taken in the seventies, judging by Pete’s age.

The singer revealed it was taken when the family lived in Sudbury, before they moved to Australia to start a “new life.”

The 46-year-old captioned his pic with: “A throwback to some amazing memories in Sudbury, Harrow, before we moved to OZ to start a new life. From left to right : Debbie, Me, Mike, Danny. Only Andrew and Chris missing.”

Peter and his family moved to Oz when he was six.

The star’s brother Michael joined in with the nostalgia and commented: “Ahhhhhh man!!! Take me back to those days… #family4life.”

The dad-of-five’s fans loved getting a glimpse into his old life.

A second wrote: “What a beautiful photo.”

Meanwhile, others pointed out how much Pete’s children with ex Katie Price, Junior, 13, and Princess, 11, look like him as a youngster.

“Junior is just your mini me💕,” commented one fan, and another added: “For a second I thought it was Junior.”

A third chimed in: “Wow, Junior is the spit of you when you were his age.”

And another follower remarked: “How much does Princess look like you? Total mini version.”

Pete also has two young children with wife Emily Andre, 29, but they choose not to post pics of their little ones’ faces on social media.