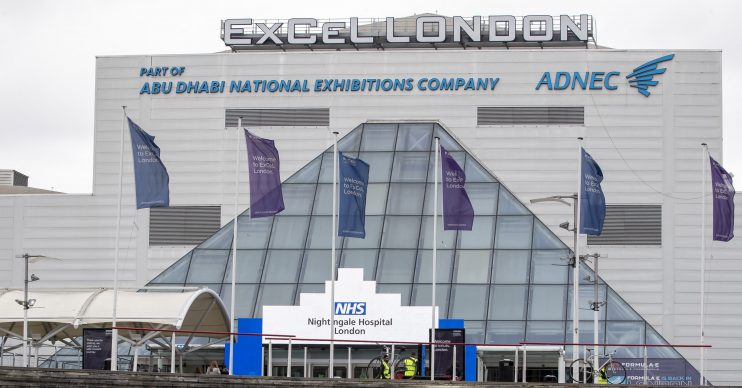 However, there are fears that Boris Johnson‘s personal photographer has infected the site with coronavirus.

Andrew Parsons is reportedly experiencing COVID-19 symptoms and is now self-isolating at home.

However, with the hospital due to start accepting patients this week, there are fears he may have spread it around the new hospital.

After taking pictures of the PM last week, the snapper headed to the hospital to take pictures.

After Boris was diagnosed, instead of self isolating Parsons went over to the new hospital at Excel to do pictures.

However, even after Boris announced he had tested positive for coronavirus, the photographer was taking pictures of staff at Downing Street.

This is despite advice to self-isolate for seven days if you had been in contact with someone known to have the virus.

A source told The Sun: “After Boris was diagnosed, instead of self isolating he [Parsons] went over to the new hospital at Excel to do pictures.”

They added: “Instead of doing the sensible thing, he has potentially passed it on to all the squaddies working over there, as well as a number of civil servants and officials he’s been in touch with.”

The source continued: “He was last close to the PM after the hand clap pics in Downing Street last Thursday. He was stood next to other photographers and film crews – potentially giving it to them too.”

The news comes as the military were drafted in to complete work on the hospital.

The facility will be used to treat those transferred from other intensive care units across London.

It will initially aim to treat 42 patients, before its expansion is “ramped up” to treat 4,000 people within two weeks.

In terms of jobs, last week it was revealed the hospital was looking to recruit help desk staff for 12-hour shifts.

NHS staff have been seconded from other hospitals to work at the Nightingale.

Some, including Rachael Moses, have put out pleas on Twitter for staff to join the team.

Team #NHSNightingale are recruiting
from #London

Fill in this form to express interest ⬇️https://t.co/FvDckKaoR6

OUR #NHS NEEDS YOU ❤️ https://t.co/wMzlqmQN8t

Agency Integra People are currently advertising for porters and food and drink distribution staff on its website.