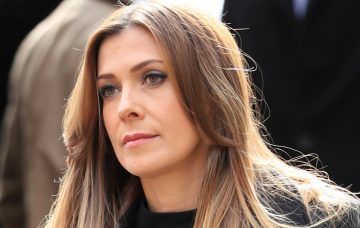 He sure earned his "nasty" nickname

Talent show judge ‘nasty’ Nigel Lythgoe recalled calling Kym Marsh fat on television and said the star has since made “an absolute mint”.

Lythgoe was a judge on Popstars in 2001 when he told Marsh on camera: “Christmas may be gone but I see the goose is still fat”, before telling her to lose weight.

Marsh, who won a place in Hear’Say on the programme and who has since found success as an actress and released a fitness DVD, later told how she was left humiliated by the incident.

The comment contributed to Lythgoe’s “nasty” nickname. However, the 69-year-old defended his no-nonsense approach with contestants.

He told the Press Association: “I went out there to make a statement, so of course ‘nasty’ Nigel was worthwhile.

“I used to choreograph The Morecambe and Wise Show and things Eric would say, I would – ‘you sang all the right notes, but you put them in the wrong order’.

“(People would reply) ‘Oohh, what a nasty thing to say’. Well, they never said that about Eric Morecambe.

“And then I suppose when I said: ‘Christmas has gone and the goose is still fat…’ (mimes outrage) ‘He called her fat!’

“And of course, she’s made an absolute mint on slimming down, looking fabulous now, acting brilliantly, and she’s made a huge career for herself, bless her.”

When quizzed about the comments by The Stage in 2010, he said: “Number one, I don’t think it was negative.

“Telling someone they are carrying too much weight is important if they are going to be a performer.

“I don’t class it as belittling someone, telling them they have to lose weight. Dancers and performers nowadays are athletes.

“So if I see a girl on the show who is overweight, I will tell her that I wouldn’t want to lift you.”

Kym has admitted that the comment cut deep at the time, telling the Daily Mail in 2016: “I’d always been quite body confident until that moment but when he said that it really affected me, I couldn’t even look at myself in the mirror.”

After Popstars Lythgoe, who was made an OBE in 2015, acted as a judge on US show So You Think You Can Dance and gave his thoughts on the current crop of talent programmes in the UK.

He said they will continue to be successful as long as “the talent continues to present itself”.

Lythgoe was dismissive of celebrity judges, saying it is “very difficult” for them to tell the truth because “they still want to sell their records and concert tours”.

But he believes Robbie Williams will be a success on the X Factor because he is honest.

He said: “I do get it, if you’ve done it and you know how tough it is to survive in the business, if you can be honest enough to lay that out for somebody, then I think it’s good.

“So although I’m saying don’t do it (celebrity judges), it can work really well.”

He was speaking at the Carousel of Hope Ball in Los Angeles, which was raising money for The Children’s Diabetes Foundation.

Do you remember Nigel insulting Kym? Leave us a comment on our Facebook page @EntertainmentDailyFix and let us know what you thought of it.