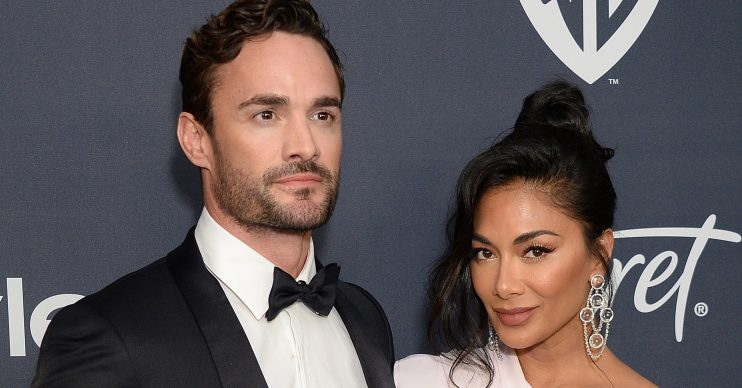 Nicole Scherzinger and Thom Evans have celebrated their first Valentine’s Day together.

The picture shows Nicole having a cuppa on a sofa as a topless Thom posed next to her eating a piece of toast.

Fans gushed over the couple with one person commenting: “Goals… you look amazing Nicole.”

Imagine being the hottest couple alive.

Another wrote: “Imagine being the hottest couple alive,” while a third said: “OMG! Hottest couple. Happy Valentine’s Nicole and Thom.”

Last month, the pair appeared to confirm their relationship by making their red carpet debut as a couple.

The pair first met in the summer last year when Thom and his Try Star bandmates took part in X Factor: Celebrity, where Nicole was a judge.

When quizzed about whether he was dating the singer, Thom said on Loose Women in November: “Who wouldn’t want to date Nicole? She’s gorgeous.”

Meanwhile, at the time, a source had told The Sun: “Thom is completely Nicole’s type. And for his part, Thom was smitten early on – he’s always said Nicole is one of the most beautiful women in the world.

The only bad workout is the one you don’t do. New decade, new week, new mindset, endless possibilities! 💪🏽✨🤸🏽‍♀️💞

Over the past few weeks, Nicole and Thom have been sharing gym photos and holiday snaps together on Instagram.

One picture, shared by The Pussycat Dolls singer Nicole, shows the pair inside the gym as they showed off their toned bods.

Nicole captioned the post: “The only bad workout is the one you don’t do. New decade, new week, new mindset, endless possibilities!”

It wasn’t long before fans began commenting and branding the couple “goals” and “the hottest couple”.