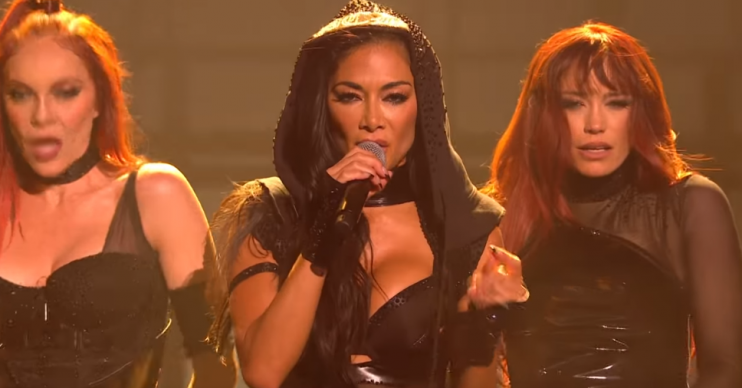 More than 419 people complained to the watchdog

Nicole Scherzinger has hit back at criticism over her racy X Factor: Celebrity performance after it received Ofcom complaints.

Last November, The Pussycat Dolls performance was disapproved by viewers and it sparked more than 400 complaints to the watchdog.

Viewers weren’t impressed with the routine and branded Nicole and her bandmates’ outfits “inappropriate” for the family show.

Speaking about the backlash, Nicole told the Herald Sun: “We’re not trying to upset anybody.

“Our true fans know our intention. Our real fans know we’re empowering and we come from a place of strength as singers and dancers.”

Our real fans know we’re empowering and we come from a place of strength as singers and dancers.

Nicole, 41, performed alongside Carmit Bachar, Ashley Roberts, Jessica Sutta and Kimberly Wyatt as they reunited for the show.

Nicole wore a PVC bikini with a sheer bodysuit and it wasn’t long before viewers started voicing their opinions.

One person said: “How many Ofcom complaints will there be for the Pussycat Dolls.”

Another wrote: “The outfits the #pussycatdolls are wearing on #XFactorCelebrity are totally inappropriate for 8.15pm on a family show.

“Not good role models for girls. You don’t have to take your clothes to be successful.”

A third added: “My 8 year old daughter is a bit confused and asked ‘are they also wearing knickers’ vile.”

A spokesperson for Ofcom later told us: “We are assessing the complaints against our broadcasting rules, but are yet to decide whether or not to investigate.”

There were many people who defended the group, however.

One said: “Mothers keep complaining about how their little kids saw The Pussycat Dolls perform in these outfits, I hope they never go to a beach on a hot summer day.”

Another tweeted: “Why would adult group needs to dress to be kid appropriate? They’re not a kid’s band.”