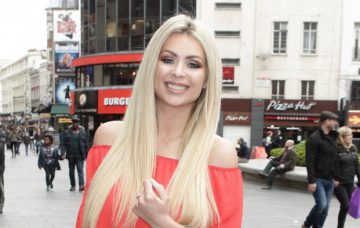 Nicola McLean has unveiled a dramatic makeover after switching her trademark blonde locks for a new dark ‘do.

The former I’m A Celebrity and Celebrity Big Brother favourite, 37, took to Instagram to show off her radically different look after dying her platinum hair a deep, dark brown colour.

She shared a snap of her new look alongside the caption: “Back to black 💃🏻 what we saying guys?”

Well, Nicola’s fans had a LOT to say!

She was lavished with compliments from admirers who said the new ‘do made her look younger and fresher.

One told her: “Dark hair suits you so much. You look so natural here.”

And a fifth agreed: “You look beautiful with both light & dark.. but I do prefer the dark.”

Nicola rose to fame as a model before appearing on I’m A Celebrity… Get Me Out Of Here! in 2008 and then Celebrity Big Brother four years later.

She’s been a regular on Big Brother’s Bit On The Side over the years and often appears on ITV’s This Morning during debates about the issues of the day.

The star appeared on This Morning just last week to discuss whether married women should take their husband’s surname.

Nicola, who married footballer Tom Williams in 2009, said she didn’t think a woman has to take her husband’s surname after marriage and she personally chose not to.

“It’s absolutely fine if you want to but I also think in this day and age, when we’re fighting so furiously for women to do whatever we want to do, why should I be Williams?” she said.

“I’m a McLean and I worked damn hard to get to where I am today as a McLean. My husband is fine with it, my kids are fine it with it. I just think it’s outdated. If you’re happy to do it, great. If you’re not, great. We should all just do what we want to do.”