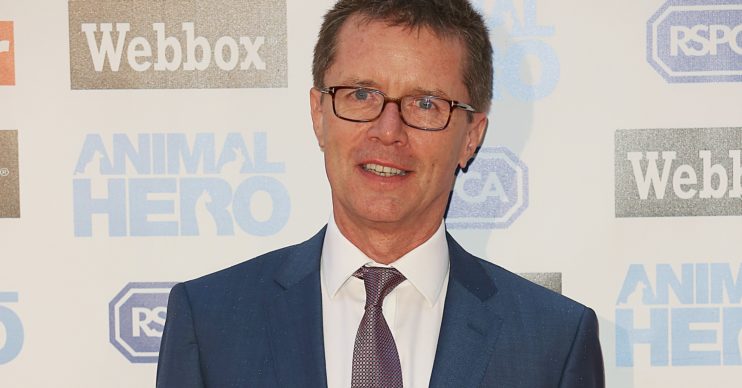 Nicky Campbell has posted terrifying footage of his wife confronting car thieves outside their London home.

The Radio 5 Live Breakfast Show host took to Twitter to Lockshare a video of his brave wife Christina ‘Tina’ Ritchie marching up to the two men as they attempted to remove parts from her and Nicky’s car.

Read more: Millions of self-employed Brits can apply for a £7,500 grant today – with payments starting next week

The shocking moment was captured by the couple’s automated outside camera and shows former newsreader Tina ask, “What the hell do you think you’re doing?” when she spots the thieves trying to strip the catalytic converter from their vehicle.

The incident happened in broad daylight as Long Lost Family presenter Nicky was in a different part of the house.

Sharing the clip to Twitter, Nicky wrote: “This afternoon. Two guys attempt to steal catalytic converter from our car.

“Tina spots them. Confronts them. They leave. “What the bloody hell do you think you’re doing?” Brazen.”

This afternoon. 2 guys attempt to steal catalytic converter from our car. Tina spots them. Confronts them. They leave. “What the bloody hell do you think you’re doing?” Brazen. pic.twitter.com/WYSBseuN4W

Once confronted by Tina, the thieves calmly remove their jack tool and walk away back to their own car, with Tina yelling a sarcastic ‘bye’ as they drive off.

Read more: This Morning viewers in tears as elderly woman cries over losing her beloved cat

Did the police get involved?

In response to a follower’s question, Nicky revealed that they called they police who arrived at the scene ‘quickly’ but Tina didn’t manager to note down the registration number of the thieves’ car.

The follower tweeted: “Did you get the reg no of their car?”

However, television and radio personality Nicky explained he was unable to do so, replying: “No. Police took a statement. There very quickly.”

Another follower wanted to know where Nicky was during the attempted theft.

The presenter admitted: “At the top of the house. Oblivious. I’d have lost it.”

It’s not the first time Nicky and Tina have been targeted by thieves with someone attempting to steal Nicky’s £600 racing bike back in 2011.

That time, the couple’s dog woke Nicky who confronted the thief completely starkers.

He revealed on his BBC radio show: “If I’d caught him I don’t know what I’d have done, probably hit him. Or maybe I would have sat on him naked until the police arrived – that would have traumatised him for life.”