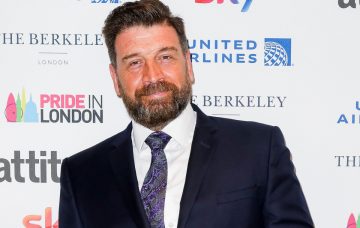 He would definitely be a hit with viewers

Nick Knowles has reportedly been offered a six-figure sum to appear on I’m A Celebrity… Get Me Out of Here.

According to The Sun, a source claims the show’s bosses are “bending over backwards” to get the DIY SOS host on this year’s series.

Read more: Nick Knowles mocked for being “too emotional” in row with DIY SOS teammate

An insider told the publication: “They know Nick is incredibly popular, and they think he’d be great TV.

“Women love him, men respect him – and it’d be interesting to see if he’s as practical in the camp as he is on a building site.”

The person added: “He’s been offered the show a few times before, but this year they really want him on it so they’re bending over backwards and offering him big money.”

However, an ITV rep told ED!: “Any names suggested for I’m A Celebrity…Get Me Out Of Here are pure speculation at this stage.”

Nick is just the latest famous face to be linked to the show.

Last month, Lucy – who plays Bethany Platt in the ITV soap – hinted she may be heading into the Australian jungle later this year.

She told the Daily Star: “I think I’d be good at the jungle. I like to challenge myself and that’s the most challenging show you can do.”

Meanwhile, Corrie’s Kym Marsh spoke about the rumours that Shayne is going on the show.

She wrote in her OK! magazine column in May: “He’d definitely be entertaining if he was to head into the jungle.

“Shayne would be fun and a good sport and he’d probably sing the entire time, as that’s what he used to do all day at work.

However, the full line-up has yet to be confirmed.

ITV has also yet to confirm the start date of the new series, but the programme usually begins mid-November and runs for three weeks until early December.

I'm A Celebrity Get Me Out Of Here Nick Knowles