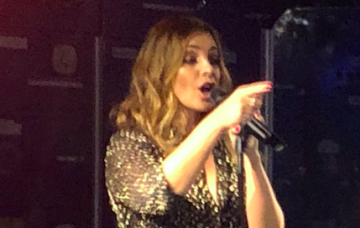 Newly divorced Louise Redknapp wows fans on the first night of her tour!

She's getting her life back on track after years of feeling "like a Stepford Wife".

Louise Redknapp hit the stage on the first night of her tour last night as she relaunched her music career after 15 years away to concentrate on marriage and kids.

Newly single Louise divorced husband Jamie in December after 19 years of marriage, and wasted no time in getting her music career back on track.

In December she performed her first gig in 15 years at Under the Bridge in London, something she described as “such a special moment”, and now she’s touring the UK reminding fans of her many hits.

She took to the stage in Manchester for the sold-out first night of her tour, looking gorgeous in a slinky blouse. And the fans loved it!

“Louise was clearly having the time of her life,” one fan told The Sun. “The room was so full of love and Louise soaked it all in.”

The former Eternal star achieved nine solo top-10 hits and made three albums before she gave up her career to concentrate on being a mum.

Read more: Channel 4 forced to bring in security for newsreader after controversial interview

But it’s rumoured that competing in Strictly Come Dancing back in 2016, gave Louise a taste of what she was missing and she decided it was time to get back on the stage.

Louise has said that she felt like a “sort of Stepford Wife” during her marriage and that now she and Jamie have split she is “coming back to who she really is”.

Fans lucky enough to be there for Louise’s first night took to social media to gush about how wonderful the evening had been.

“It was everything I wanted it to be,” said one emotional fan. 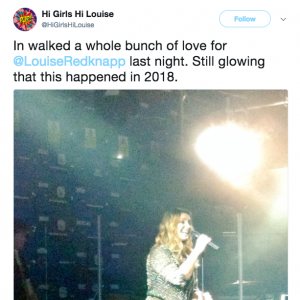 “Still glowing that this happened in 2018,” said another, sharing a photo of the star on stage.

And one fan simply wrote: “She was fab!”