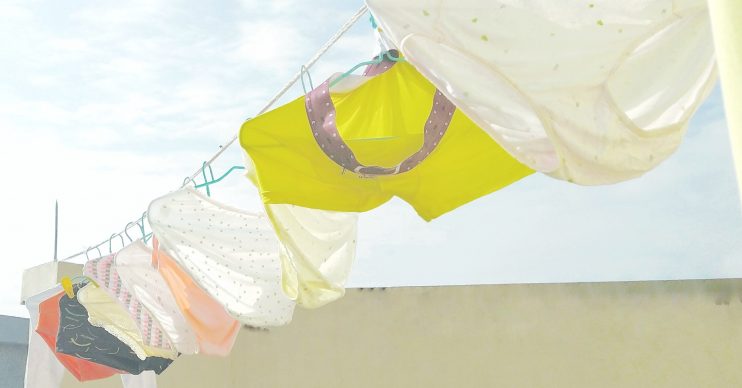 Well, according to a new disturbing study, almost half of people don’t change their pants every day.

The survey, by underwear maker Tommy John, revealed that 45 per cent of people have’t changed their underwear for a few days.

Read more: You can now buy heated underwear to keep you warm this winter

Even more disturbingly, 13 per cent of those surveyed admitted they had worn the same pair of pants for SEVEN days or more.

The study – in which 1,000 Americans were surveyed – revealed that men are 2.5 times more likely than women to wear their pants for a week.

A representative for Tommy John told Mail Online: “These results were split fairly evenly between men and women, which throws any theories out the window that women are more hygiene-conscious than men, or vice versa.”

The study also revealed that people rarely buy new underwear as 46 per cent have owned a set for a year or more.

Meanwhile, 38 per cent admitted that they had no idea how long they have had certain undies.

Tommy John recommends changing your underwear every six months to a year as it builds up microorganisms and fungi.

These results were split fairly evenly between men and women.

The rep added: “Women should be especially careful, as they’re more at risk than men to experience health issues due to unclean underwear.”

Meanwhile in underwear news, we recently revealed that Amazon is selling heated underwear to keep you warm this winter.

The Smart Heated Panties aren’t exactly the most attractive knickers in the world, but they will definitely keep you toasty over the next few months.

Read more: B&M is selling a doormat sensor that plays Christmas songs for £4.99

The undies are £41, high-waisted and have a 12-hour life span on the “winter warmer” setting.

As well as keeping you warm, the knickers claim to be a good alternative to a hot water bottle on your time of the month.

The undies have five settings – ranging from 37C to 50C.

According to the Amazon website, the pants “regulate menstruation, nourish the uterus, play an anti-inflammatory repair, scientifically regulate the uterus environment” as well as “effectively protect the health and fertility”.

Do you change your underwear daily? Leave us a comment on our Facebook page @EntertainmentDailyFix and let us know.