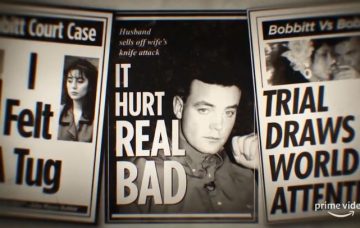 In 1993, Lorena Bobbitt’s marriage to John Wayne came to a gruesome conclusion, when she committed an act that left any man who heard of it crossing his legs.

And every one DID hear about it. The story became front page news.

During the night on 23 June in Manassas, Virginia, Lorena had left her husband sleeping in bed next to her, walked to the kitchen, retrieved a knife and returned to cut off possibly his most vital organ, his penis.

Not only did she slice it off… She drove away from the house and threw the dismembered member in a field – although she did eventually call the police.

John Wayne was reunited with his willy after an extensive search by the police, and had the severed penis reattached in hospital during an operation that took nine and a half hours.

So was Lorena a deranged sadist who got enjoyment from mutilating her husband? Or was there a history of domestic abuse that drove her to commit the heinous act, as she claimed?

Read more: Girl was kidnapped TWICE by family friend after he brainwashed her parents, documentary reveals

The true-crime documentary relives the night in question, and the subsequent court case in which Lorena told the judge and jury that her husband John Wayne had raped her the night she removed his manhood.

She also claimed she had suffered years of physical and mental abuse at his hands, as well as accusing him of stealing her wages and spending it.

After hours and weeks in court and multiple witnesses coming forward, both the prosecution and defence agreed that Lorena had been the victim of abuse which had pushed her to carry out the ‘separation’.

The trial, which was televised, gripped the nation with its shocking tale of love gone wrong.

While John Wayne was acquitted of rape, Lorena was found not guilty due to temporary insanity and was free to go.

After disappearing from the spotlight, Lorena reverted to her maiden name of Gallo, remarried and had a daughter. She also founded Lorena’s Red Wagon, a charity that helps victims of domestic violence.

John, meanwhile, launched a band called The Severed Parts as a way of milking his fame.

The documentary reveals that he has been repeatedly arrested since divorcing Lorena  in 1995, and has gone to trial many times for spousal abuse – most recently against his third wife.

Do you remember this story from the 90s? Leave us a comment on our Facebook page @EntertainmentDailyFix and let us know what you think!