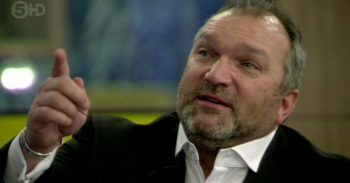 Neil ‘Razor’ Ruddock told he could “drop dead” any second

He's been trying to shift the pounds since

You picture sports stars as being a vision of health, but a shocking new health documentary has blown that out of the water.

Former footballer Neil ‘Razor’ Ruddock has reportedly been warned by doctors that he could “drop dead” any second, after he underwent tests for an ITV show.

According to The Mirror, Neil, 50, – who used to play for England and also starred on I’m A Celeb and Celeb Big Brother – was given the shocking news during filming of Harry Redknapp’s new two-part documentary special, Harry’s Heroes.

The I’m A Celebrity… Get Me Out of Here! winner plays host to a group of nineties football players – including David Seaman, Robbie Fowler, Mark Wright, Matt le Tissier, Chris Waddle, Rob Lee, Ray Parlour, Lee Sharpe, Mark Chamberlain and Paul Merson – who have all been tasked with getting fit enough to play a German football team.

But Harry, 72, was apparently concerned about his friend Neil’s health ahead of training, and sent him to see a heart specialist.

“Given your lifestyle and your family history, we’ve really got to do something quite drastic about that – and I’m talking about medication to protect you.

“If I don’t intervene, you are at a risk of having a heart attack and a stroke. Razor, you cannot afford to take this lightly please.”

Neil’s wife, Leah Newman – who shares two daughters with him – then admits: “It was really shocking in there. She basically said he could drop dead at any minute and I’d be on my own with the children. So it’s hit home, what we need to do – and we’ll do it.”

The former Liverpool player goes on to say he’s ready to make the necessary changes to get his health back on track, and has already lost four stone.

This sounds like just the wake up call Neil needed. Harry’s Heroes: The Full English will air on 18 and 19 March, on ITV, at 9pm.

Will you be watching this? Leave us a comment on our Facebook page @EntertainmentDailyFix and let us know what you think.