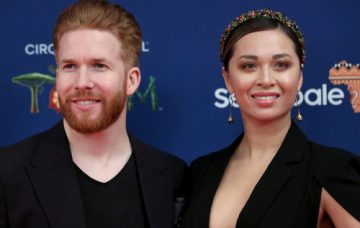 The Jones’ marriage was rocked last year when she was snapped locking lips with her celebrity partner – but Neil says he has been able to “accept” she made a mistake and they have moved on.

The 36-year-old told HELLO! magazine: “I think, for me, I can accept people make mistakes. My mum always said: ‘People make mistakes in their lives. Don’t react, try to understand’. So that is how it always is for me.”

The couple also said they were thankful for the support of their families as their relationship came under the spotlight.

Neil continued: “When our family contacted us seeing something has happened they said: ‘We know you, and we still love you, we know you have made a mistake.”

Katya added: “That’s what helped us get through it. We only focused on people who know us and love us.”

The 29-year-old dancer admitted the attention from fans and the media was “quite shocking” but insisted her biggest concern was for Neil.

She also revealed her hubby urged her to stop looking at comments made about her online because she found “the hate” very saddening.

Despite speculation they could be axed from Strictly due to the fallout of the scandal, both Katya and Neil will return for the next series of the hit BBC One show.

“I never thought I would love this job so much and become the biggest Strictly fan myself!” Katya gushed on Instagram when the line up of pros for 2019 was revealed.

Meanwhile Seann recently confessed he had been “stupid and selfish” to cheat on his long-term girlfriend Rebecca Humphries by snogging Katya.

I’m eternally grateful to be back on @bbcstrictly season 17 together with @mr_njonesofficial ! I still remember that feeling when we danced on red carpet launch show for my very first time in 2016! I have never felt anything like this before. The buzz, the energy and happiness filled my heart! I never thought I would love this job so much and become the biggest #strictly fan myself! To have the opportunity to perform, to create, teach a beginner, see them grow, get to wear all these glamorous costumes, work with the best team in all departments- is an absolute blessing, that’s never taken for granted! Thank you for having me back and I’m ready to give my absolute best again this season! #strictlycomedancing #strictly #dance #dancer #dancing #ballroom #latin #season17 #grateful #blessed