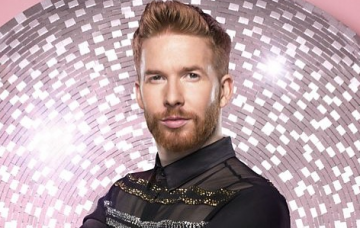 It’s been a long time coming, but Neil Jones is reportedly set to finally be paired up with a celebrity dance partner on Strictly.

So who is the lucky lady?

Well, according to a Strictly insider, Neil, who has a been a fixture on the show for two years, but has never strutted his stuff as a pro dancer with a celeb, will team up with Caroline Flack for the Christmas special.

Caroline was a competitor on series twelve and went on to win the series with her dance partner Pasha Kovalev.

Neil, meanwhile, despite being known to viewers for the past two seasons, has only ever previously appeared in group dances, and as a pundit on It Takes Two.

But sources close to the show reckon that’s all about to change.

A source said Caroline, although delighted to be returning for the Special, had not been expecting to be paired with Neil:

“Caroline jumped at the chance. She expected to be paired up with pro dancer Pasha Kovalev again, but Strictly bosses were inundated with requests for Neil to finally get a celebrity dance partner,” the insider revealed.

Most recently, Neil, 35, has been making more headlines as the husband of fellow dance pro Katya Jones, after she was photographed snogging her Strictly dance partner Seann Walsh.

The couple have been married since 2013, and met more than ten years ago at dance tournament. They both joined Strictly in 2016.

Following the publication of the picture, Seann and Katya later issued an apology for the ‘one-off drunken mistake’, and Katya insisted her marriage to Neil was fine.

According to the mole, the BBC decided to couple Neil up with Caroline to show their support for him in light of the recent issues.

Read more: Robbie and Ayda ‘at war’ behind the scenes on X Factor

Speaking to the The Sun on Sunday, the insider said: “It’s their way of showing Neil they support him and are grateful for the dignified way he handled the situation with Seann and Katya.”

Well this should be an interesting pairing, shouldn’t it?

And it’s about time Neil got his moment in the limelight, don’t you think?

What are your thoughts on Caroline being paired with Neil? Leave us a comment on our Facebook page @EntertainmentDailyFix and let us know what you think.