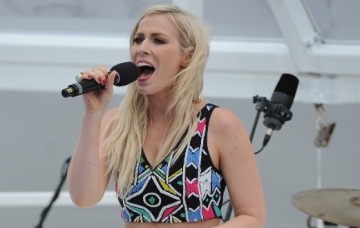 What a way to ring in the new year...

Most of us know her for mid-2000s hits like Unwritten and Single, but Natasha Bedingfield will also be going by another name in 2018 – Mum!

The 36-year-old singer revealed in a sweet Twitter post that she’s given birth to a baby boy.

Lying in a hospital bed, Natasha held up a takeaway coffee cup with “MUM” written on it.

And she captioned the image: “Omg! Guess what just happened at the very end of this year! The happiest new year ever!”

Her fans were quick to reply and offer heartfelt congratulations, with one writing: “An excellent way to go into the new year in style – many congratulations indeed!”

Another said: “Blessings to you and your new family member.”

Natasha and her husband, Matt Robinson, revealed the happy news just three months after they announced they were expecting.

In November, Natasha uploaded a picture to her Instagram account of the two of them, with the caption: “1+1 is 2 but 3 makes a family!”

And she’s been happy to keep fans updated on the progress of her bump, in a series of Insta posts that showed her expanding midriff.

Natasha and Matthew married in 2009, and revealed before the birth in a Boomerang video that they were expecting a boy.

After announcing the pregnancy, Natasha told The Sun: “Becoming a mum is ­something I’ve always dreamed of but for a long time I felt it was way off in the distance.

“Now the bump is starting to really show, it’s sinking in that this is really happening… I’m so excited to embrace this huge life change. And Matt is super supportive.”

Read more: Holly Willoughby reveals why her return to Dancing On Ice is extra special

Congratulations are well and truly in order for Natasha and Matthew!

Oh, and one last thing – let us know the name please!