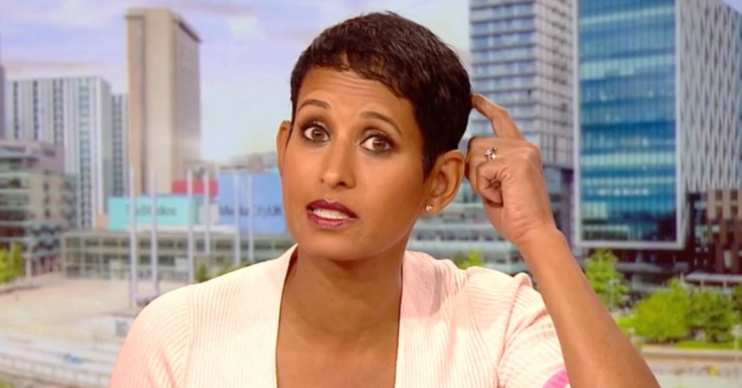 Naga Munchetty makes shock admission about her behaviour: ‘I am trying to control my temper’

She said she had two temper tantrums in a day recently

Naga Munchetty revealed that she had a “very bad temper tantrum”, admitting that she’s trying to get her anger under control.

The BBC Breakfast host made the comments on her Radio 5 Live show while interviewing pro-golfers Martine and Heather Gilks.

Naga, who is a fan of the sport, opened up about her rage during a recent round of golf.

Naga Munchetty on her ‘temper tantrums’

The 47-year-old TV host said: “I am trying to control my temper. I had a very bad temper tantrum yesterday.”

Explaining what happened, Naga said: “I’ll tell you about this game I played yesterday, I played terribly.

I had a very bad temper tantrum yesterday.

“I had a horrendous temper tantrum, twice.

“But the company was so good… me and my partner have lost against these other two three times on the trot.”

But luckily, her mood improved when she scored a birdie.

She added: “We were one down going up on the 18th and I chipped in for birdie.

“Can you imagine the joy? I had played terribly but we had a real crack and then I did that at the end. I was buzzing!”

The admission came after Naga recently made a “brutal” joke, at the expense of weather presenter Carol Kirkwood on BBC Breakfast.

Carol had said she had four hats to show off while she was there, but Naga noticed she had only worn three.

Naga said: “I’m sure you’ll tell me off for remembering this, but I thought you were going to have four hats?”

Explaining that she’d decided to stick with three, Carol said she wanted to show off all angles of the one she had on at the time.

“Less is more,” Carol said. “But can I show you the back of this one?”

As she turned round to show the camera the rest of her hat, Naga joked: “Ah I always think the back of your head looks much better!”

‘You only say that to you best friend, though!’

Naga joked that she’d be in trouble for her comment the next time she saw Carol, laughing: “Carol, I love you!

Fellow presenter Charlie Stayt was sat on the couch with Naga in the studio.

He joked that he heard an “audible ouch” from guests Sara Dallin and Keren Woodward of Banarama when Naga made the comment.

And Keren added light-heartedly: “You only say that kind of thing to your best friend, though.”