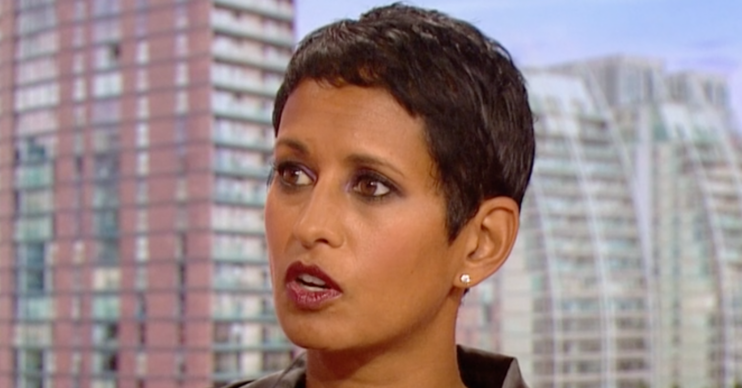 Naga Munchetty couldn’t resist replying to a viewer after her dress was mocked online today.

Despite looking as glam as ever, one viewer wasn’t feeling Naga’s ensemble and, as a result, decided to take to Twitter.

“That reminds me @TVNaga01 I must put the black bin bags out today,” teased one viewer.

Another fan jumped to her defence, saying: “Naga you look gorgeous.”

It turns out the fan wasn’t the only one not to be impressed with Naga’s outfit.

Another asked: “Is Naga going to wear her dressing gown all day?”

“‘I love that brown satin’ said no woman ever,” ranted a third.

“Naga wears some gorgeous clothes but today is not one of those days,” teased a fourth.

A fifth then ranted: “Why’s Naga wearing a raincoat in the Studio? Are there no coat hangers in that place??”

That reminds me @TVNaga01 I must put the black bin bags out today.

“Did Naga get up late this morning? Can’t understand why she is still in her pyjamas,” added a sixth.

Meanwhile, Naga and other BBC stars such as Greg James recently had their salary revealed in the BBC Annual Report.

Breakfast presenter Naga was reported to have received an extra £110,000. It is thought she earns £365,000 in total for her role on the popular morning show.

However, Naga wasn’t the only one to get more cash from the BBC. Half of the Beeb’s 74 top on-screen and radio earners enjoyed a pay increase last year.

More than £1 million in increased pay was handed to top talent.