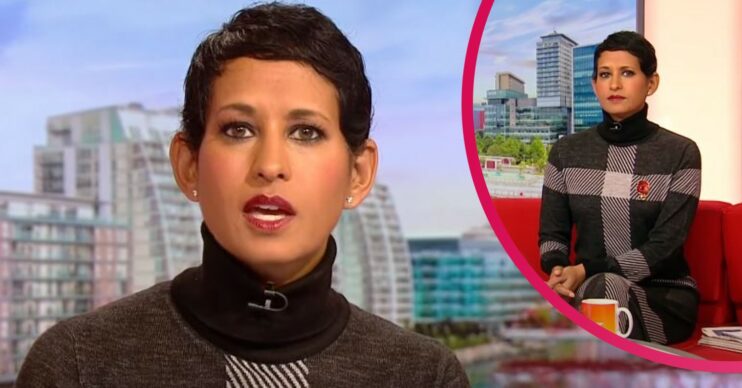 The journalist and presenter’s choice of outfit caused quite a stir on social media as she hosted Friday’s programme with Charlie Stayt.

It was a woolen chocolate brown number with a high polo neck and cream striped pattern.

Why not dress up, life is short!

The dress appeared to be fairly long.

Read more: Naga Munchetty slaps down Twitter troll who accused the presenter of being ‘snide and irritating’

Naga, who presents BBC Breakfast with with Charlie at the end of each week, is known for her stylish outfits.

But the fashionista hit a bum note today with her wooly jumper dress.

What did viewers say about Naga’s dress?

Many social media users agreed the dress looked more like a cosy blanket to curl up on the sofa with.

One viewers tweeted: “Is Naga wearing one of those blankets with a pocket for the TV remote?”

In addition, a second said: “Naga dressing for #COP26 by wearing an up cycled dog blanket.”

After that, a third said: “Love looking at my sofa blanket on the TV this morning… not sure it makes a good outfit Naga!”

Another added: “Naga being a bit previous with the old Christmas jumper.”

However, one person asked Naga on Twitter: “Love today’s dress – where is it from?”

Another said: “Love your dress! You always look so stylish!”

Naga, 46, is known for her appearance on Strictly Come Dancing and a string of broadcasting roles.

In January, a listener on her BBC Radio 5 Live show called in to discuss lockdown – and couldn’t help but comment on her style.

He said: “May I just say Naga that you always dress as if it’s an awards ceremony on BBC Breakfast.”

Shocked Naga replied: “Why not, life is short!”

What do you think of Naga’s jumper dress? Let is know over on our Facebook page @EntertainmentDailyFix.