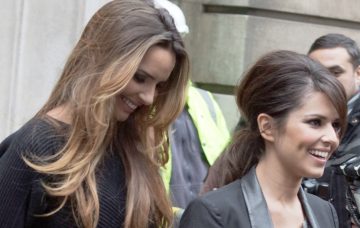 Nadine Coyle has lifted the lid on her relationship with former Girls Aloud bandmate Cheryl.

The pair have long faced rumours of friction between them but in a new interview with The Sun’s Fabulous magazine, Nadine insisted the truth is far more mundane.

Nadine, 32, said there was never any big falling out or drama between them.

They were simply colleagues who drifted apart.

As many of us do.

It’s well known that Cheryl is very close to her Girls Aloud bandmates Kimberley Walsh and Nicola Roberts, while Nadine and Sarah Harding were more on the outskirts of that little group.

But Nadine told Fabulous mag there was nothing “toxic” going on behind the scenes, it was just a case of different people having different interests and friends.

“I don’t speak to them. I’ve not spoken to them in a long, long time,” said Nadine.

“She phoned me before she went into Celebrity Big Brother and I was like, ‘What are you doing?’ I was worried about how they’d portray her. But that’s it.”

Nadine said she doesn’t miss any of the band, adding: “They were great colleagues and we worked very well together for a long time. But I have lots of great friends of my own.”

So there we have it, no drama!

Girls Aloud formed in 2002 on the ITV talent show Popstars: The Rivals, and went on to enjoy a hugely successful career.

They had four number one singles, were nominated for five BRIT Awards and released five studio albums and two compilations.

The group split in 2013 following a farewell tour to mark their ten-year anniversary.

Since then, they’ve all embarked on various solo projects.

Cheryl, of course, was a judge on X Factor and enjoyed a lucrative solo career, as well as becoming a brand ambassador for L’Oreal.

Nadine also embarked on a solo career, while Kimberley has turned her hand to the West End, TV presenting and a stint on Strictly Come Dancing.

Sarah swapped singing for acting with roles in the likes of Coronation Street before appearing on Celebrity Big Brother, while Nicola also released solo music and her own make-up line.

Do you miss Girls Aloud? Leave us a comment on our Facebook page @EntertainmentDailyFix and let us know!