The 54-year-old actress was approached several times to join the daytime show when it launched in 1999 but couldn't see herself getting along with the other presenters, Jane Moore and Kaye Adams so repeatedly said no.

Thankful she changed her mind

But now she's admitted she's thankful that she changed her mind. 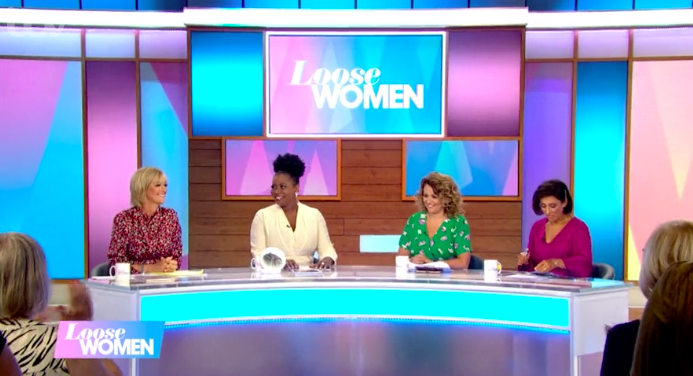 Nadia and the current panel of Loose Women (Credit: ITV)

Nadia - who rejoined the show in 2013 after more than 10 years away - admitted: "I turned down the job three times.

"I thought, I'm not going to get on with Jane and Kaye at all, because I'd just come out of EastEnders and had led a very actressy life.

The day has arrived, it's a momentous occasion as we celebrate our 20th anniversary. We'd love to know what Loose Women means to you? Have any of our stories inspired you over the years? 🥳🤩💕 Join us for a very special show, today at 12.30, @itv. #LooseWomen20

"I'd never done anything where I had to be myself before. I was very nervous, I was a party girl, I was hungover a lot and my life was a bit of a mess. I was messy in my mind.

"But even when I was on the panel with the clever birds and I felt insecure, I still felt it was the right place for me to be. Loose Women has shaped who I am."

‪It’s fast approaching the 20th anniversary of @loosewomen and today’s show @ITV 12.30 is a nostalgic look back at two decades of heated debate, hysterical laughter and everything in between. Don’t miss it. Little did we know when we filmed the pilot and first episode (pictured, with @nadiasawalha @kayeadams and Philippa Kennedy) that it would still be going strong after all these years‬. A shout out to @helenwarnerofficial @janebeacon and Clare Ely for starting it and creating the vision that sustains to this day, and to all the Loose ladies who make it the best TV job in the world. And also to @jemojunior for all his hard work on the clip show and to make-up and wardrobe for working their magic on us every day! @coleen_nolan @staceysolomon @andreamclean1 @ruthlangsford @christinelampard @lindarobson58 @denise_welch @the_mcgiff @brendaemusic @iamsairakhan JSP and Gloria Hunniford. Make-up @donnamaymakeup @lperriton @leedin6 and wardrobe @mothershoppers #loosewomen #20thanniversary #itv #women #friends

And the stars admitted they are pleased the show has forced them to make some unlikely friendships.

Coleen Nolan said in a joint interview with OK! magazine: "There isn't another show like it and it's great that we all come from different backgrounds.

"I mean, who would've thought I'd become such great friends with Janet Street-Porter?!

"Without Loose Women, our paths probably would never have crossed."

When it comes to choosing new faces to join them on the panel, the presenters "instinctively know" who would fit in.

20 years ago, I got a call to ask if I would come along for an audition for a new TV show called @loosewomen With a name like that, it’s fair to say that I was sceptical, but after passing the test and being teamed up with @kayeadamsofficial and @nadiasawalhaandfamily I decided it was worth giving it a go. And here we all are, still at it - give or take a few breaks in between - after 20 years. I have made lifelong friendships with all of them and, suffice to say, it’s the best job in television. And it’s longevity is totally down to you, the viewers. So thank you and here’s to the best 20 years. #loosewomen #friendship #20thanniversary @staceysolomon @kelle.bryan @iamsairakhan @the_mcgiff @denise_welch @denise_welch @andreamclean1 @ruthlangsford @christinelampard @penny.lancaster @coleen_nolan @Linda robson58 @brendaemusic #janetstreetporter #gloriahunniford And of course a HUGE thank you to everyone who works behind the scenes to make the show what it is. We couldn’t do it without you.

Kaye said they all knew Coleen would make a great addition when she originally appeared as a guest.

Coleen added: "You've got to be willing to be open, the public expect that now."