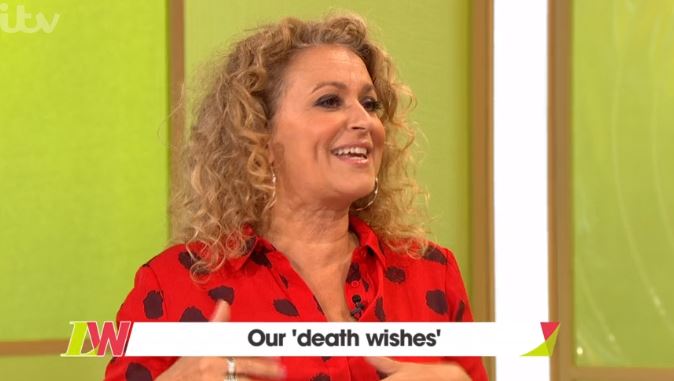 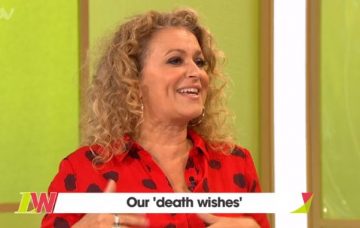 The women spoke about their dreams for ‘the end’ after it was revealed Sir Bruce Forysth has been laid to rest under the London Palladium.

Nadia, 53, said: “There is a movie called Captain Fantastic. They are this hippy family. The mum dies and they all stand on this mountain and all have flowers in their hair and burn their mum in a funeral pyre.

“And the girl sings ‘Sweet Child O’ Mine’ and sings it so beautifully. I’ve given [my daughter] the task. She has to practice it all the time! I want her to do that, I need her to sing that at my funeral.

“Then afterwards they go to an airport and flush her down the a toilet. And all her family stands around and they laugh and laugh.”

But Nadia insisted: “No! My family all have that sense of humour. Then they get on a plane and go and do something wonderful.”

Stacey, meanwhile, said she’d quite like to come back as a ghost.

“I definitely don’t want to be flushed down the toilet!” she declared. “If I could do anything I’d like to still be around! I don’t like the thought of ghosts but if I could become one I wouldn’t mind.

“I could spread my own ashes, skipping down the street!”

Fellow panellist Anne Diamond said she’d probably take inspiration from her name, saying: “I’d probably be made into a diamond! Basically, they super heat you to such a degree that it actually does carbonise into a diamond.”

Jane Moore, meanwhile, said she’d like to be given a plaque at the journalists’ church, St. Bride’s, in Fleet Street, London.

“I don’t care what happens to me physically but there’s a fantastic church on Fleet Street and if you’re a famous journalist you get a seat if you die,” she said.

But Jane joked she was getting a bit concerned as the seats were slowly being taken and there may not be one left for her.

Have you got a ‘death wish’ or funeral desire? Leave us a comment on our Facebook page @EntertainmentDailyFix and let us know