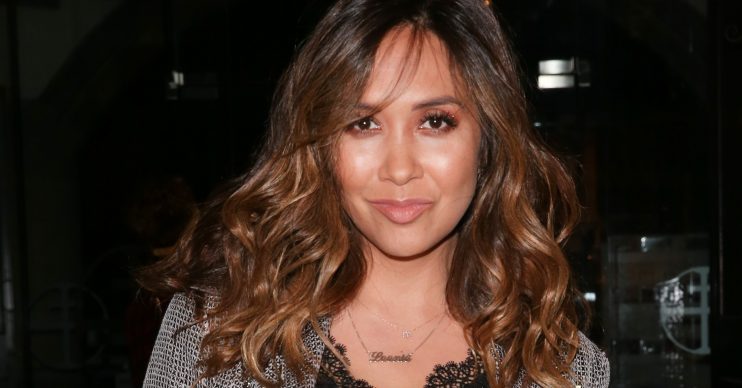 Myleene Klass showed off her blossoming baby bump during an outing in London this Friday.

The former Hear’Say singer’s tummy appeared a lot bigger as she stepped out in the capital in a flowing maxi-dress.

Myleene was beaming in the new pictures, as she walked along cradling her bump.

She looked every inch the yummy mummy in her stylish outfit, complete with large sunglasses.

Myleene put comfort first and wore a pair of white trainers under her dress.

She seemed happy and relaxed as she strolled into Global Radio headquarters.

The 41-year-old radio host and singer is expecting her first child with boyfriend Simon Motson.

She also has daughters Ava, 11, and Hero, eight, with her ex-husband Graham Quinn.

Myleene recently revealed that she would like more children in the future.

She explained that if beau Simon had his way, they would start trying for another little one after their baby is born later this year.

She told Fabulous magazine last month: “Oh my god, he loves me pregnant, If Sim has his way, we’ll have another one immediately. I mean, I always wanted a big family. He wants a big family. Nobody will ever invite us anywhere ever again!”

She added of expanding their family unit: “I explained to the girls – and to Sim’s son and daughter as well – that love is like a big bucket. Nobody needs to come out in order to put someone else in – the bucket just keeps on expanding. Just chuck ’em all in! It’ll be exactly the same when the baby comes, just another one in the bucket.”

Myleene thrilled fans when she announced her third pregnancy in February, with a snap of her baby bump on Instagram.