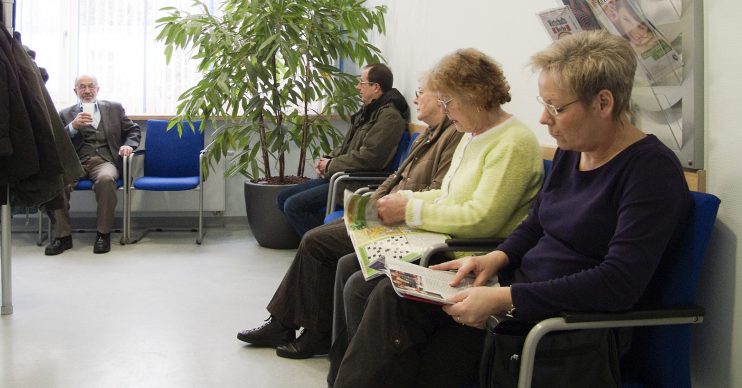 Would you fancy a three-hour wait with a toddler sat on your lap?

A trip to a local walk-in centre has sparked quite the debate on parenting website Mumsnet.

One poorly patient recently attended her local GP surgery and couldn’t find anywhere to sit because it was “absolutely packed in there”.

However, while that’s nothing new, the waiting room wasn’t full of sick patients.

The people taking up all the seats were, she said, “small children”.

The user revealed: “I recently attended my local walk in centre for a minor ailment, waiting time was around three hours. It was absolutely packed in there. I noticed that there were quite a few very ill-looking adults stood as all the seats were taken.”

Then came the crux: “However, many of the seats were taken by small children.”

“Am I being unreasonable to expect parents to put them on their laps so that adults can sit down?” she posted.

Three hours with a toddler on your knee is not comfortable for the adult or the child, especially when one of them is poorly.

Well no, as it turns out, as a lot of people on the thread agreed with her.

“There should be signs put up saying seats for the ill and injured only. It’s really not fair!” said one user.

The thread also hit out at people who take their entire family along to the walk-in centre with them.

“I had a recent visit to A&E and had to sit on the floor while a whole row was taken up with one person and their entire family – boyfriend, two children, aunty, sister, dad and grandad,” one user explained.

Read more: You can now get married in Wetherspoons for £4.5k – including food and booze

“And she was very vocal about the fact she was there due to an ingrowing toenail,” they added.

“It’s a day out for some people!” exclaimed another.

She added: “When i worked in A&E some people would turn up with several family members AND picnic food – not just a sandwich or two but a full-on meal.”

However, not everyone agreed.

One woman said: “Three hours with a toddler on your knee is not comfortable for the adult or the child, especially when one of them is poorly.”

Another added: “You can’t really judge small children on seats unless you knew all the details of why they are there. I sat in A&E for two hours before someone came to collect my children once, my appendix had burst, would you have expected them to sit on my knee?”

“I don’t think you can moan about small children needing a seat. There is no reason why they are less important than you. Being in A&E with a poorly toddler is miserable for everyone,” another commented.

Clearly thankful for small mercies, another pointed out that the woman should be “grateful they weren’t running around the place” being naughty.

The debate – or rather thread – rumbles on…

Where do you stand on the debate? Tell us on our Facebook page @EntertainmentDailyFix.