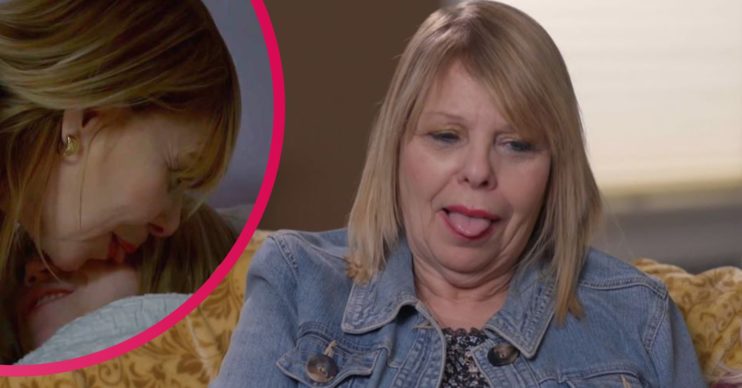 It started when Alena was a child

A doting mum has opened up about the close relationship she shares with her 21-year-old daughter, whom she licks awake every morning like a puppy.

Marcia and Alena’s mother-daughter bond features in the new series of documentary show sMothered, which sheds light on the duo’s unconventional morning routine.

Marcia, 68, explains on the programme: “My relationship with her is unique. In the mornings I walk into her room and I just lick her all up.

“She kept pestering me for a puppy and I couldn’t get her a puppy, so I turned into the doggy. Alena tastes pretty good and all sweet, I just want to eat her all up!”

Read more: For the Love Of Dogs: Paul O’Grady fans in tears over Whisper’s emotional reunion

Alena, whom Marcia adopted when she was a toddler, thinks the ritual brings them closer together.

She says: “I love it when my Mamma licks me, it kind of makes me feel closer to her because we’re doing something funny and out of the ordinary.

“It’s a thing we do every single day!”

And the puppy ritual continues once Alena is out of bed, as she loves to chase her mum around the house.

I love it when my Mamma licks me.

Alena has an enzyme deficiency, so the chasing began as a way to increase her stamina and encourage growth. Since then, it’s become part of their morning routine.

Marcia says: “It was really a good thing to help her grow and it just continued.”

Once Alena has caught her they play ‘kissy-poos’, which sees her kiss her mum all over.

“When I catch my Mamma I do all my kissy-poos and I kiss her all up,” says Alena. “She’s very kissable!”

Marcia understands that to some, their behaviour might seem unusual.

“Some people don’t agree or they wonder what is wrong with her,” says the doting mum. “I love the idea as she’s growing up of being able to do all those silly things. It’s getting a little tricky as she’s getting older, but still do all the same antics and we still play the same games and we have fun.”

Alena says: “My Mamma is definitely my best friend.”

– sMothered is on TLC Tuesdays at 9pm