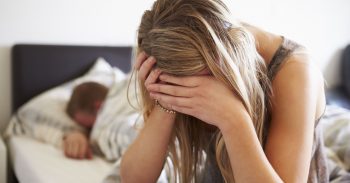 The woman said she "can't stop crying" over his comments

A woman was left devastated when her husband asked her why she hasn’t lost her baby weight just two months after giving birth.

The mum revealed she gained three stone during her pregnancy with her son and has already shifted two stone.

Taking to Mumsnet, the woman told fellow users she’s recently welcomed her first son with her husband – who she’s been dating on-and-off for five years.

The woman said she “wasn’t very thin before” her pregnancy, but she “looked OK”.

She explained: “Before we were married I would often see on his phone he would Google pics of skinny women, lots of them… he enjoyed chatting to them too… but that was very long ago, before we were serious.

“But something told me to check his phone. A week after baby was born. Bam. Every single day. Pages and pages of Facebook pics of skinny girls from the gym. Even some of the ones from his past. Broke my heart but I said nothing, for the sake of baby.”

The new mum said she found messages from her husband to a “girl at the gym” and he was “commenting on how nice her arms are and flirting with her”.

“He said, ‘I have a question. You lost all the fat and weight in the past for your ex. Why don’t you love me enough to do it for me?’

“I was in shock and could not believe what I heard. In the past I had lost a lot of weight before I dated him, but that was early twenties and I ate nothing and was miserable all the time… that’s not a fair comparison.

“I was in tears and told him that’s not fair. And he said it again. Why don’t I love him enough to lose the weight I gained. It’s been a terrible night. I’ve been crying and he doesn’t care. Said if we didn’t have a child he would be sleeping at a hotel.”

She added: “I am broken. I truly believed I married someone who loved me for me, not how I look. I believed he was happy with me.

“I guess he married me believing I would get thin… I can’t stop crying. I’m so insecure to the point of feeling I don’t deserve to be in this house… that because of my weight I’m not worthy to be around him.. it’s broken me that much.

“I feel like I’m worthless and I can’t go on anymore. My eyes are so sore from crying. He doesn’t care. I look in the mirror and just feel disgust and feel huge.”

Fellow mothers were horrified by the woman’s post and advised her to break up with her husband.

Read more: Wife furious after husband tries to pay her £600 for sex

One person said: “What a disgusting way to treat you. You must be feeling so vulnerable. Your weight is none of his concern and to be frank, he sounds like a complete pig.”

Another wrote: “I would honestly tell him to pack his things.”

“I bet you could lose 80kg of unwanted flesh by tossing him out the window,” a third commented.

What would you do? Leave us a comment on our Facebook page @EntertainmentDailyFix and let us know.