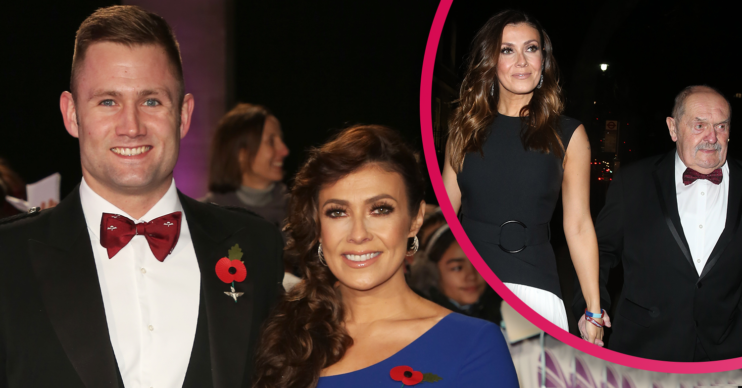 Morning Live host Kym Marsh has confirmed that she and fiancé Scott Ratcliff will get married later this year.

However, the former Coronation Street star was dealt a blow around the same time when her dad David was diagnosed with incurable prostate cancer.

Admitting that he is “struggling to walk”, Kym revealed David is “determined” to walk his daughter down the aisle.

What did Morning Live star Kym Marsh say about her wedding?

Chatting to OK!, Kym said Scott – who is in the military – went away and booked the wedding.

They’ll get married later this year in a military-themed wedding surrounded by friends and family.

Read more: Why is Kym Marsh’s fiancé and what does he do?

And she said the happy news has given dad David something positive to focus on.

She said: “My mum and dad absolutely adore Scott. This is a bit of good news, because Dad’s not too well, but responding well to his latest treatment.

“They can’t cure him, but their hope is that it slows everything down and we get some good time with him. I think the main thing is taking the pain away.”

Kym pays tribute to her parents ahead of her wedding

Former Corrie star Kym also paid tribute to her parents, who have been married for 66 years.

She said they spend “every single day together” and she’s always looked at them and thought that she wants a marriage just like theirs.

Kym has been married twice before – to EastEnders star Jack Ryder and Hollyoaks actor Jamie Lomas.

However, she’s certain now that she’s going a man who is just like her dad.

And she can’t wait for David to give her away to her handsome husband-to-be.

So what do we know about the wedding?

Kym and Scott will get married later this year, she revealed it’ll be the “lift everyone needs” and it’ll take place in a “few months’ time”.

She added that it’s going to be a “stunning and very military wedding”.

We can’t wait to see the pictures!

Head to our Facebook page @EntertainentDailyFix and tell us what you think of Kym’s happy news.