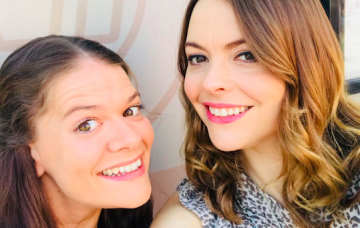 She will 'come back from the dead' - and fans aren't amused!

Coronation fans have struggled to accept the news that Liz and Jim McDonald’s ‘dead’ daughter will be arriving in Weatherfield in the coming months.

The 41-year-old actress, who has played super-bleep Tracy Barlow since 2002, has shared a photo with her new castmate Hannah Ellis Ryan – and even let slip a vital piece of information about her character.

Posting a shot of them together on her official Twitter page, Kate told her 117,000 followers: “So pleased to be filming with the new girl on the block @HannahEllisRyan welcome! Playing Hannah!”

In turn, Hannah replied: “Having a ball on set with this wonderful human :).”

So pleased to be filming with the new girl on the block @HannahEllisRyan welcome! Playing Hannah! pic.twitter.com/wQYpLvJDAl

So Jim and Liz’s daughter, who was called Katie, is now called Hannah. Accordingly to Kate… Oh, this is getting confusing!

And she is obviously filming scenes with Tracy Barlow, which makes sense as she’s engaged to her brother Steve…

While several of Kate’s fans welcomed the newcomer via social media, there are many who have threatened to stop watching the ITV soap because of her storyline.

And the plot begins soon, with Liz set to go through emotional turmoil as her long thought dead daughter reappears alongside dad Jim when he is released from prison.

Longtime viewers know that the baby tragically died after being born prematurely in 1992.

But it will soon be revealed that a hospital mix-up meant that Katie actually survived and went to live in Australia.

Jim even produces a DNA test proving she really is their daughter.

In the words of Jim, it’s a shocking story, so it is.