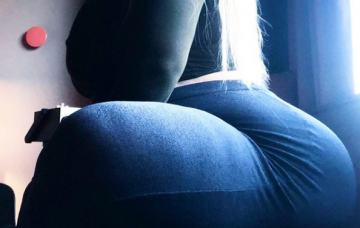 She doesn't need to sit on a bean bag, that's for sure!

Natasha Crown has a dream – and it’s not that weird one about sitting your exams naked.

The 25-year-old plus-sized model longs to own the world’s biggest bum and is well on the way to fulfilling her ambition.

The Serbian bum enthusiast has had three Brazilian butt lifts in four years in the hope of achieving her aim.

Her pursuit of the world’s largest resting place has led her to gorge on fatty foods in a bid to have even more fat to inject into her giant 6.5 foot derriere, which currently measures 80 inches.

Natasha ate pizza and a whopping six kilos of Nutella – other chocolate spreads are available – to gain more than three stone before undergoing her second surgery.

The model, who appears on E!’s Botched this week with regards to her “saggy boobs”, now has a staggering 4,500ccs of fat in each buttock – the equivalent of five litres.

Talking to the show, she says: “I think bigger is better. I will never ever be slim again. My bum is like a different dimension.

“I have always been different and in Sweden women think slimmer is more beautiful. But I think people need to see this is how real women should look.”

Attempting to beat Sarah Massey’s posterior of seven feet in circumference, Natasha asked for surgeons to take fat from her back, arms and inner thighs to go in her bum.

Natasha has since had a third buttock lift, as well as a boob job and fillers in her chin, lips and cheekbones.

She added: “Over the last four years I have had three Brazilian butt lifts, one breast augmentation and then I’ve done some fillers in my chin, lips and my cheekbones.

Speaking to the show, Natasha continued: “My goal is to have the world’s biggest bum and nothing is going to stop me.”

Well it’s good to have goals in life we suppose…

But we wouldn’t want to sit next to her on an aeroplane.

Do you think we need bigger role models, or is it unhealthy? Leave us a comment on our Facebook page @EntertainmentDailyFix and let us know what you think!