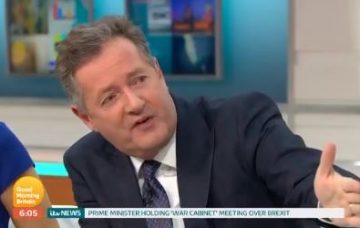 Another day, another way to wind Susanna up!

Piers Morgan was up to his usual cheeky tricks on Wednesday morning as he poked fun at Good Morning Britain co-host Susanna Reid’s outfit.

Poor Susanna can never get a moment’s peace with Piers around, which he proved once again by sharing a photo to Instagram showing him pointing at her blue and white striped shirt.

Plenty of fans rushed to defend Susanna, with one viewer insisting: “I think it’s a nice outfit!”

Another added: “She looks stunning like she always does!!!”

A third chimed in: “Susanna always looks amazing. I like it. You’re just jealous Piers haha.”

Another follower simply said: “That lady could wear a sack cloth and still look amazing.”

Others, however, agreed with Piers that it wasn’t their favourite outfit, with one telling Susanna: “It looks like you have just come out of hospital!”

Probably not the look she was going for!

As well as mocking poor Susanna’s outfit on Instagram, he also did it on the show, kicking off the episode by pointing out at Susanna and saying: “It’s really early. Some people may still be at home or maybe still in bed… wearing their pyjamas!”

Susanna insisted: “This is actually a dress, this is not pyjamas. I can prove it by standing up!”

Susanna’s day got a bit worse when she found out somebody thought she was wearing a maternity dress!

She stood up and lamented: “They’ve got a point, to be honest!”

Piers quipped: “I’m not the father, I want that to be crystal clear!”

Susanna isn’t the only Good Morning Britain star Piers has found himself winding up this week.

Just yesterday he was told off by Charlotte Hawkins after interrupting her news bulletin by drinking tea.

Charlotte was none too impressed when Piers’ arm and tea mug kept popping up on the screen as she tried to read the headlines, and wasn’t shy about unleashing her annoyance!

After finishing the bulletin, the former Strictly star told Piers: “You may be making an effort to be quieter and not interrupt as much. But you’re still making your presence felt, because your cup of tea, literally as I was speaking, straight through the shot.”

Cheeky Piers quipped back: “It’s probably the most interesting thing about your news bulletin, my hand moving across.” 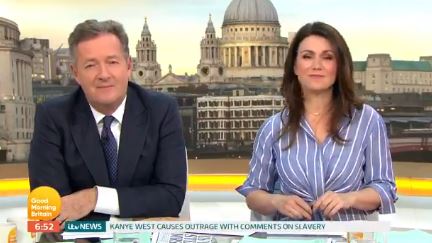 “It was the director’s fault,” added Piers, “because he can point these cameras from any angle, he’s deliberately choosing to do it to embarrass you.

“I raised my tea in exactly the same way I’ve always raised it, he knows it, you know it, I know it.”

Perhaps it’s no surprise then that GMB bosses enlisted the services of a harpist for Wednesday’s show, to calm things down and make everyone happy!

We have tried EVERYTHING to keep @PiersMorgan calm.

There's a harpist in the studio and it *seems* to have worked 😲 pic.twitter.com/OM1QqvpIfE

Introducing the harpist to a surprised Piers, Susanna said: “What we need is something to calm you down. Here we go. Special invitation to the studio this morning.”

A calm looking Piers said after the harpist had finished playing: “I find the harp the most soothing thing. I have no idea who you are or why you are here. Nobody mentioned there would be a gigantic harp in the studio.

“I find that incredibly soothing. Are you in a hurry to leave this morning? Could you just stick around all morning and every time things get a little bit heated you could play a bit of harp for us to calm things down?”

Which musical instrument do you find the most soothing? Leave us a comment on our Facebook page @EntertainmentDailyFix and let us know what you think!