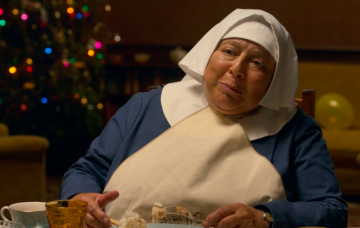 Miriam pulls no punches in her memoirs

Call the Midwife star Miriam Margolyes famously doesn’t mince her words and she has revealed the “nastiest” person she has ever worked with.

The actress and chat show favourite, 80, hit out at a former colleague in her autobiography This Much is True.

Writing in her memoir, she says Terry and June legend Terry Scott wasn’t a great kisser before describing his treatment of her and others as “nasty”.

She said: “He was horrid to the chorus girls, tried to grope and kiss them and if they wouldn’t play, he rubbished them publicly.”

However she added that she suspects he would have “behaved himself” while starring alongside June Whitfield in Terry and June.

And while Terry was ranked number one in her list of nasty co-stars – Miriam also had strong words for the likes of John Cleese and Bill Oddie.

Miriam worked alongside them both as well as Graham Chapman and Tim Brooke-Taylor at Cambridge’s Footlight’s drama club.

Of them, Miriam recalls: “I didn’t like the Footlights boys and they really didn’t like me. They made that obvious.

“When I say ‘they’, I refer to a most distinguished group. John Cleese, Graham Chapman, Bill Oddie, Humphrey Barclay, Tony Hendra and Tim Brooke-Taylor.

“The only girl in the show, I was a pert little madam and thought I was as good as they were — and they didn’t.”

Miriam also wrote how she “admired” the later creation of Monty Python by the men but insisted they were “geniuses not gentlemen”.

She added: “If you think about it, the Monty Python shows didn’t feature funny women, only the occasional dolly bird.

“And I certainly wasn’t that.

“The treatment I received from those Footlights boys was diminishing, pointed and vicious. On reflection, it is they who diminished themselves.

Read more: As Miriam Margolyes swears on This Morning, here’s all her funniest moments

“John Cleese, Bill Oddie and Graham Chapman were total s***s — and they have never apologised.

“The only one who did was the late Tim Brooke-Taylor.”

This Much is True, is available now in hardback and digital editions.