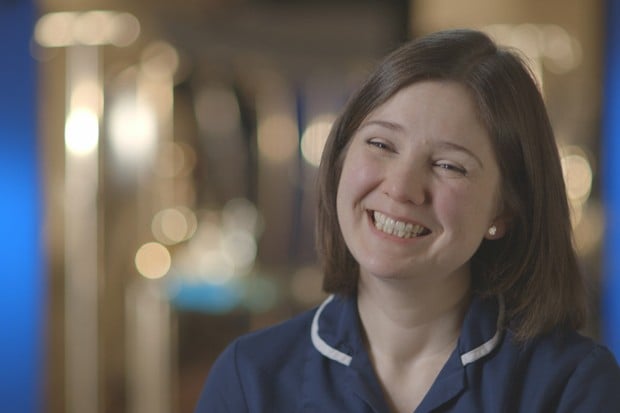 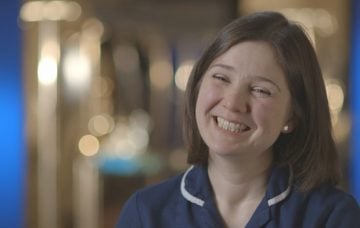 Viewers took her straight to their hearts

Inspiring One Born Every Minute midwife Harriet Fisher knows how exactly how patients who experience complications in pregnancy can feel, having discovered she had cancer at 31 weeks into her own.

Aged 29, Birmingham practitioner Harriet – who works at the hospital both she and her daughter were born in – was diagnosed with thyroid cancer, which spread to her lymph nodes.

Daughter Esther was delivered via Caesarean section after an attempt at being induced failed.

Harriet later had her lymph nodes removed. But radiotherapy caused her to endure a horrible separation from Esther for two weeks after spending three days in a lead-lined room. It also meant she couldn’t breastfeed her daughter.

Both mother and daughter are now well and, three years on since her thyroidectomy, brave Harriet is part of a midwife-led unit at Birmingham Women’s Hospital,

She was a instant hit on social media as the programme aired on Channel 4 last night, despite viewers’ tweets joking how the childbirth scenes are enough to put anyone off having kids.

Harriet the midwife is awesome! #OneBornEveryMinute

Can I book Harriet in now for any future births I’ll have? #OneBornEveryMinute

Watched #OneBornEveryMinute for the first time in 3years and now I’m so scared to pop this baby out! 😩😱

#oneborneveryminute has absolutely traumatised me tonight 👀 no children here thank you 🙅🏼‍♀️

#oneborneveryminute is not making me want a baby any time soon🙈

“It shows love at its rawest moments. It also shows how frightening the process of becoming a parent can be,” she said.

The 32-year-old added she felt One Born Every Minute has the opportunity to educate everyone on the realities of birth.

“Birth can be immensely empowering and life-changing for all the right reasons.

“It can be the making of a woman, a couple or a family. Birth can also be very scary.”

What did you think of the series return? Head on over to our Facebook page @EntertainmentDailyFix to have your say.

One Born Every Minute is on Channel 4 on Wednesdays at 9pm.

Channel 4 One Born Every Minute