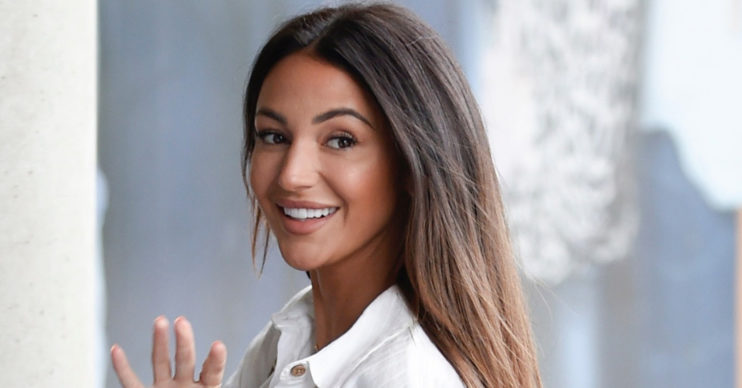 The actress was previously forced to quarantine with husband Mark Wright

Michelle Keegan has shared a stunning video of herself getting glammed up as she returned back to work.

The Our Girl star, 33, is back to the grind following a two-week lockdown with husband Mark Wright.

Ahead of the eventful work day, Michelle filmed herself as her trusty makeup artist worked wonders on her face.

The actress looked stunning as she modelled a comfortable grey dressing gown and perfectly curled hair.

She then panned the camera around to her makeup artist, who was sporting a blue face mask.

The outing comes days after Michelle was spotted with her mum Jackie in central London.

The mother and daughter headed out for a well-deserved girls night at the Ivy Asia restaurant.

Making the most of her first few days of freedom, Michelle documented the evening with a series of snaps on Instagram.

In one, Michelle posed for a mirror selfie in a 1950s inspired dress, while another showed the star and Jackie next to St Paul’s Cathedral.

What is Michelle Keegan working on next?

It’s unknown what’s in store for Michelle in the upcoming months – although it certainly isn’t Our Girl!

The former Coronation Street star starred as Sergeant Georgie Lane in four series of the BBC drama before departing earlier this year.

Read more: Stacey Solomon brands sons ‘buffoons’ after they mess up her garden

It’s since been revealed the show won’t be returning for a fifth series.

Our Girl creator Tony Grounds told RadioTimes.com: “With the finale of series four showing Georgie ready to move on with her life, it feels like the right time for us to do the same.”

Despite this, Tony admitted he’d be keen to reunite with Michelle at some stage in the future.

He explained: “Michelle and I are keen to continue our working relationship and, who knows, maybe we’ll catch up with Georgie in the future.”

Do Michelle and Mark want children?

The couple have repeatedly said that they will start a family in their own time.

Michelle recently revealed her frustration at people asking her when she is going to have a baby with former TOWIE star Mark.

Nobody knows what goes on behind closed doors.

Speaking to Cosmopolitan UK, she said: “A few years ago it didn’t bother me and I answered the question, but now I think, ‘I don’t need to answer that because nobody knows what goes on behind closed doors’.

“I know for a fact if Mark finished a job, nobody would ask him if he was going to have a baby.

“It’s not fair. It does make me feel frustrated.”