And she's looking as amazing as ever...

There are only eight weeks to go until Christmas, and Michelle Keegan is keen to get us in festive party frock mode.

Read more: Debenhams closures – is your local store on the closing down list?

In the clip, the former Corrie actress posed away in a multi-coloured sequinned mini dress, which she teamed with some barely-there strappy sandals.

Wearing her long brunette locks loose around her shoulders, Michelle performed effortlessly for the camera, proving her modelling skills are are as on point as her acting abilities.

Her legions of fans were quick to comment on her video, and compliment her on the dress.

Other’s chipped in to brand the dress ‘amazing’ and ‘cute’, while one followers enthused they ‘love sequin season’. 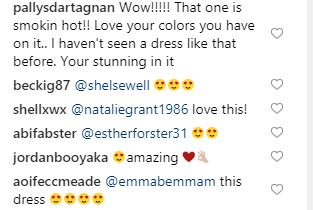 Tina, 31, who is married to former TOWIE playboy Mark Wright, first collaborated with Very in 2017, but had previously had another clothing range with Lipsy.

She told Hello! magazine at the time of her Lipsy colab that although she adored fashion, her acting was her real vocation in life

“Acting is my passion, it’s what I love to do,” she said. “But I do love fashion, so to be able to do something like this with Lipsy gives me the best of both worlds.”

When she went on to sign up with Very.co.uk, Michelle joined a host of other popular female celebs who have had collections with the brand, including  Holly Willoughby, Fearne Cotton and Rochelle Humes.

Stockport girl Michelle shot to fame in 2008 when she joined the cast of Coronation Street as Tina McIntyre. She went on to wow audiences with her portrayal Lance Corporal Georgie Lane in the gritty BBC drama series Our Girl.

Multi-talented Michelle is about to add another string to her bow, too, as it was recently revealed she will be appearing on Celebrity Bake Off next spring.

Michelle will join a line up which includes Caroline Flack and Georgia Toffolo on the charity version of the cooking show.

What do you think of Michelle’s fashion range? Or celebrity collaborations generally?  Leave us a comment on our Facebook page @EntertainmentDailyFix and let us know what you think.