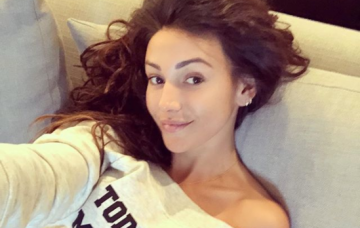 Michelle Keegan is a girl after our own hearts!

Given her svelte figure and flawless skin, we’d never had guessed she’s a chocolate fiend, but it turns out she isn’t afraid to indulgence in a sweet treat – even when she’s in bed!

The Our Girl actress, 30, shared a tweet in the early hours in which she told her 3.74m followers: “Eating Ferrero Rochers in bed at 3.45am: living!”

She ended the message with a hands raised in celebration emoji.

Her fans agreed she was “living the dream!!”, as one put it, while another said, “sounds perfect.”

Her indulgence made many green with envy.

“Lucky you! 3 pounds from my target at Slimming World. I can’t afford that although love them as they are so lush! Have one on me,” one fan told her.

Read more: Kylie Jenner confirms she’s given birth to a baby girl and explains why she kept pregnancy secret

Others speculated that there could be more to the actress’s middle of the night munchies than meets the eye.

“Pregnant?” one fan asked, while other wrote: “#cravings?”

Sorry, but when did eating chocolate in bed become the preserve of pregnant women?!

We do it all the time so perhaps her fans are reading a bit too much into this one!

Michelle has been enjoying a well-earned break from work in recent weeks, after wrapping filming on the latest series of Our Girl and jetting over to LA to visit her husband, Mark Wright.

And it’s been rumoured she loves it so much in Hollywood she may not come back!

The TV pair have reportedly been house hunting in LA as they are considering putting down roots there thanks to Mark securing a job as an entertainment reporter for US TV channel Extra.

However, it’s unlikely to be a permanent move if he does happen, as Michelle told Heat magazine last year: “If a job came up in America I’d jump at the chance, but I don’t think I’d move over there because I’m such a homebird.

“If a job came up where I had to live there for a certain amount of time. I’d definitely do it, though.”

Michelle better remember to pack plenty of her favourite chocs if they do leave the UK!