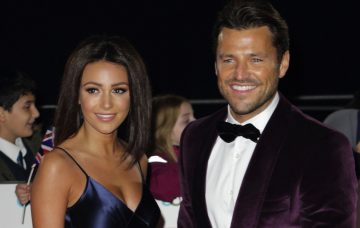 And she hints at a possible reunion with hubby Mark Wright

When you’re in a long-distance relationship, it can sometimes be difficult to keep the embers of romance burning.

And no doubt Michelle Keegan and her husband Mark Wright have had their own challenges while working thousands of miles apart – she in the UK and he in Los Angeles.

However, the Our Girl actress, 30, has slammed suggestions that her marriage to TV presenter Mark, 31, is a ‘disaster’.

And, dismissing any whispers that the couple could go their separate ways, Michelle hinted that she could even join her hubby across the pond one day…

Mark began his career in TOWIE, but last year landed a dream job presenting the entertainment show Extra in Los Angeles, casting doubts over his marriage to Michelle.

However, despite admitting that the couple do sometimes discuss the long-distance thing, former Corrie actress Michelle insisted that the situation isn’t as bad as some people make it out to be.

She told The Sun: “There’s so much negativity behind the fact that if I work away and Mark’s away, it has to be a disaster.

“That’s the only negative I get from working away. I’m quite a positive person anyway, so I don’t read all the negativity.”

The negative speculation could soon disappear anyway, as Michelle suggested that she’s not averse to setting up home with her fella in the States.

Earlier this week, Mark was left red-faced when Keith Lemon handed him a saucy gift during a visit to the UK.

The Essex-born hunk was a guest on Celebrity Juice when Lemon presented him with a sex toy and suggested that Mark and his wife could use it while they FaceTime across the Atlantic.

Quipped the host: “Let’s just pretend that’s Michelle there [on the screen]…. ‘Hiya, shall we have some FaceTime sex?’

“Then you just kind of [use the toy as well]. You’ve got different settings.”

But rather than storm out of the studio in disgust, Wrighty admitted that the gadget could come in handy.

He laughed: “I need that ASAP. I want it. I actually want it!”