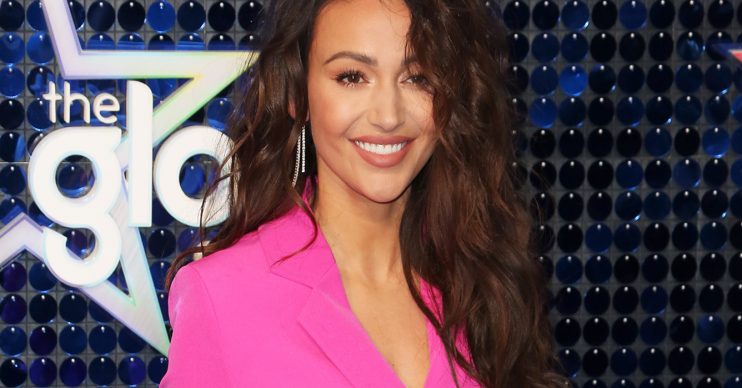 The Our Girl actress was sitting in her dressing gown enjoying a cuppa as Mark spoke to his followers.

As Mark panned the camera towards her, Michelle quickly moved her legs and exclaimed: “Hello! Legs open!”

Read more: Our Girl to KILL off Georgie Lane at the end of series in heartbreaking twist, according to devastating fan theory

She then burst into laughter before putting her hand over her mouth.

Mark giggled before continuing his live stream with Olly Murs.

Michelle recently wowed fans by giving them a glimpse into the couple’s glamorous bedroom on This Morning.

The former Coronation Street star appeared on the daytime show to speak about the new series of Our Girl, which aired on Tuesday night (March 24).

But it was her bedroom that got viewers talking as many compared it to a “palace”.

Another said: “When you’re sat on the sofa in your dressing gown feeling like Waynetta Slob and Michelle Keegan Skypes in from her palace looking like this.”

One added: “Michelle’s bedroom is very fancy, how dare she have nice stuff lol.”

However, after the first episode, fans reckon Georgie could be killed off.

One viewer wrote on Twitter: “#OurGirl theory: Georgie is gonna die in the last episode.”

The last episode will air on April 28 so we’ll have to wait and see if this happens.

It was a hard decision because I absolutely loved the job.

What we do know though is that Michelle is leaving her role after this series.

Why is she stepping back from her role?

The star admitted on This Morning that she wants to “explore other opportunities”.

She said: “It was a hard decision because I absolutely loved the job. This time we filmed in South Africa but previously we’ve been in Nepal, South Africa, Malaysia, it’s bitter sweet because I’ve been to so many amazing places.”

Our Girl airs on BBC One, Tuesdays, at 9pm.

Did you enjoy the first episode of Our Girl? Visit our Facebook Page @EntertainmentDailyFix and let us know.