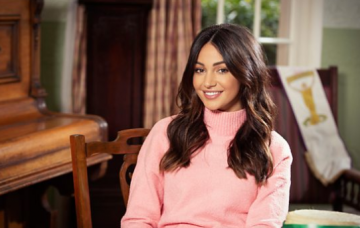 Our Girl actress was fascinated to find out about her ancestors.

Michelle Keegan has said she was delighted to star in the latest series of Who Do You Think You Are? as it enabled to find out more about the “strong women” in her family.

The Our Girl actress said she always knew she came from “a long line of strong women” but she was fascinated to find out how her female ancestors survived the Second World War and campaigned for women to get the vote.

Speaking on The One Show on Tuesday night, she said: “I’ve always been interested in my family history. I was always the one to be asking my grandparents questions. I knew my grandmother was from Gibraltar so I found that fascinating.”

The BBC show took Michelle out to Gibraltar where she followed in her maternal grandmother’s footsteps, seeing where she worked as a nurse and where she met Michelle’s grandfather.

Michelle also discovered that her Gibraltarian great-grandmother, Leonor, was forced to leave home during the Second World War, when all the women, children and elderly were evacuated to the apparent safety of London where, less than a month later, the Blitz began.

Further back, Michelle discovered her great-great grandmother Elizabeth Kirwan lived in poverty in Manchester at the start of the 20th century.

Michelle unearthed a special connection to suffragette leader Emmeline Pankhurst, and extraordinary evidence of her great-great grandmother’s support for the fight for votes for women, which enabled Elizabeth to vote for the very first time in 1918.

“I also found out my great-great-grandmother was a Suffragette,” Michelle told Alex Jones and Matt Baker.

“Emmeline Pankhurst was the registrar on her birth certificate so she is part of the story. We went to the Pankhurst Centre and that’s where I found out my great-great-grandmother was also a Suffragette. Her occupation is in the census as suffragist so I was really excited.”

The 30-year-old said investigating her family history was a “positive experience”.

She said: “I always knew I was from a long line of strong women by looking at my grandma and my mum and aunties – my mum is one of four girls – and they are very strong women. Now it totally makes sense!”

The presenters also asked Michelle if she would move out to LA where her husband Mark Wright is working as a showbiz reporter for US channel Extra!

She replied: “I’m always asked this. I would love to work out there but not live. I’m too much of a home bird.”

She added that she also finds it frustrating at times how the Americans struggle to understand her Manchurian accent!

“They always ask if I am Australian!” she said. “I find I have to speak more slowly.”

Michelle’s episode of Who Do You Think You Are will be broadcast on BBC One on 6 June at 9pm.