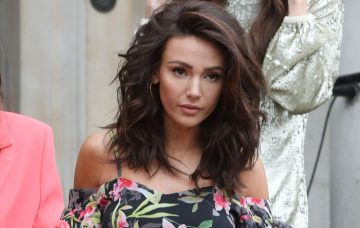 Michelle Keegan denies having surgery on her face

Michelle Keegan has laughed off speculation she may have tweaked her appearance with the help of a surgeon’s knife.

The Our Girl actress has been on screen for over a decade now and, unsurprisingly, her appearance has changed as she’s grown up in front of the cameras.

Her answer? NO WAY!

Michelle, 30, told Sunday Express’ S Magazine: “I like the fact people point out that they think I’ve had a nose job.

“They think I’ve had new cheeks, a new chin – but I haven’t and I don’t think I ever would, if I’m being honest.

“I’m scared it would go wrong.”

She did, however, add she’s not against surgery if somebody think it’s the right option for them.

It’s not the first time Michelle – who shot to fame on Coronation Street at just 20 years old – has been forced to deny using surgery to change her looks.

Back in 2015, the ex soap actress told Star magazine she hadn’t had surgery, but if she did choose to one day, it wouldn’t be anybody else’s business.

“It doesn’t really upset me. People always say, ‘Have you or haven’t you?’ But it’s my business,” she said.

“It’s my face. So what if I have or haven’t? I don’t read it when people speculate about it.”

Michelle echoed those comments in a chat with OK! magazine just a year later, pointing out her looks were bound to change over the years as she was ageing.

She said: “Of course I’ve changed, who wouldn’t have in almost 10 years? Apparently I’ve had my chin changed, my nose, and it’s like what?! I was 20 years old!”

It’s been a busy few months for Michelle who has just launched her new fashion collection with Very, and is putting the finishing touches on the next series of BBC army drama Our Girl.

She’s also been jetting between the UK and LA, where husband Mark Wright is currently based while he works for US entertainment show Extra.

The couple, who celebrate their third wedding anniversary in May, have frequently been dogged by rumours their marriage is on the rocks, but both have always said they’re happier than ever and just because they don’t live in the same country doesn’t mean anything is wrong.

Michelle recently told Daily Mail’s You magazine the couple have a rule not to go more than three weeks without seeing each other, and while they miss each other loads, they FaceTime every day.

Have you ever had a long-distance relationship? Leave us a comment on our Facebook page @EntertainmentDailyFix and let us know your experience.